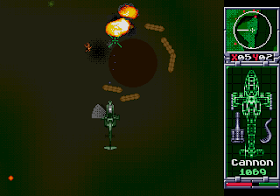 Genre: Action
Perspective: Top-down
Pacing: Real-Time
Gameplay: Shooter
Vehicular: Helicopter
Published by: Time Warner Interactive
Developed by: Zyrinx
Released: 1994
Platform: SEGA Genesis / Mega Drive
Initially, Zyrinx created a kind of alpha demo, which demonstrated the capabilities of the Megadraeus 2 prefix, and was a simulator of the helicopter AH-64B Apache. All this business was shown at one of the exhibitions, and experts highly appreciated this work. Zyrinx without hesitation, locked in his office, and soon the light appears game - the heroine of this description - Red zone.
The dictator, the old-school communist Ivan Retovitz, who is the leader of the self-proclaimed country Zuristan (nothing like the name?), Announces to everyone that it has a huge army that is equipped with the best weapons. And Comrade Retovits, threaten to cover the world with atomic bombs within 24 hours (I wonder if Ivan knows what consequences this rash action will have?), Which he stole in one of the countries of the former USSR. Three commandos from the secret unit, should on a super-modern helicopter AH-64B Apache, hunt down a crazy dictator hiding in his secret bunker, and destroy it.
Graphically, the game is something akin to a masterpiece: cutscenes are made in the form of scanned images, and attention: a live video (!). Yes, it is terribly "I can not", but it does not shine with a variety of colors (everything is done in red and black, but this is a kind of business card of the game). But it almost spoils the impression.
In the game itself, our eyes will be presented with 3D sprite objects, in a compartment with vector objects. Detailing is simply amazing. Of the 16-bit old woman, survived all that can and can not. On the use of platform resources, with the Red zone can argue, perhaps, only UMK 3, and even then it is doubtful whether the balance should lean in favor of the latter.
The game is very cool music - basically all the songs in the techno processing. He listens to "cheers", and does not interfere even during the game, but, on the contrary, only transfers the atmosphere of intense fighting. Sounds as varied, so and quality. This is unambiguous.
The gameplay is built on the principles of the Strike series (remember: Desert, Urban ...). Only the view of everything that is happening is not isometric, but above (do not panic, it does not spoil the game at all). Missions are divided into two types: those where we fly by helicopter, and those where we go peshochkom.
Management is similar to what is present in the games of the Beat series. The arrows are responsible for the direction of flight / movement, button A - machine gun, B - rocket shot and C - rocket switching (Stinger-self-guided, Rocket-medium, Hellfire-powerful).
Managing the fighter: A - the main weapon, B - optional, and C - jump / open boxes. Commandos we have a choice of three: Shades, Rocco and Mirage. The first is armed with a machine gun and grenades, a second flamethrower and a grenade launcher, and Mirage as well as Shades automatic, and knives (which can be selected after the throw). In both versions of the game, we need to pick up boxes with weapons and medicines in order to replenish our ammunition and the health / armor of the helicopter. In the case of the latter, also canisters of fuel (the turntable does not fly on an honest word).
We have to perform a variety of missions, from obtaining intelligence from a spy, and ending with the destruction of a super powerful Soviet fighter. All the action will take place on one huge map, we will be given tasks, indicate the coordinates of the location of the mission's goal / goals, and everything in this spirit. The map itself is very informative - everything is done as a satellite navigation system - you can look at almost all the objects located on the map, several times increasing the photos with their image.
Oppose the player will be a variety of opponents, and simple soldiers, and fighters in a compartment with submarines, which can knock your turntable in a couple of seconds. Before the mission, it's definitely worth looking at the location of enemy forces, fuel and ammunition, as well as boxes with armor, in case anything needs to be done.
The replay value for the Red zone is high: I'm sure that after its passage, the gamer will again return to its passage, or the passage of individual missions.
P.S. I almost forgot to mention the mini-game, which you can play during one of the walking missions. Do not forget to write down the password for it, and then you can play by typing its code in the Password option. The game is an arcade flying game, in which on a spaceship, you have to shoot asteroids. It's funny, in a word.