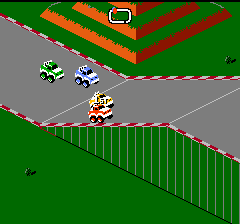 Genre: Action, Racing / Driving
Perspective: Bird's-eye view
Visual: 2D scrolling, Isometric
Gameplay: Arcade
Vehicular: Automobile, Track Racing
Published by: Nintendo of America Inc.
Developed by: Rare
Released: 1988
Platform: Nintendo (NES)
Continuation of the first RC Pro-Am with more detailed graphics. There were trees, rivers, springboards. On the trampolines, the machine jumps. You can improve your car in the store, replacing parts for newer ones.
The goal of the game is to go through 36 tracks and get into PRO AM LEAGUE, that is, in the "Professional League of America". In addition to the main routes, there are intermediate runs, such as TUG-0-TRUCK and DRAG RACE. In TUG-O-TRUCK you have to reach the finish line on your lane, and in DRAG RACE you just need to get to the finish as quickly as possible (the positive result in both cases is achieved by quick alternating pressing of the buttons A and B). Trails lie in the city, park and desert.

There are also huge arrows. This thing is useful - it speeds up the movement.

Track 13 - in the middle of the finish line - $ 100.
Track 15 - on the left under the bridge - CONTINUE.
Track 18 is a sign ? Between the bombs - CONTINUE.
To replace cars during the race (this can be done twice), you need to compose the words Pro Am 2 from the letters lying on the track.
‹
›
Home
View web version