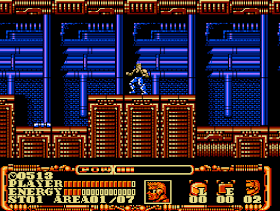 Genre: Action
Perspective: Side view
Gameplay: Platform
Published by: Taito Corporation
Developed by: Natsume Co.
Released: 1992
Platform: Nintendo (NES)
The company Taito once again pleases us with a quality creation with good graphics, memorable music and exciting atmosphere. The continuation of the game Power Blade takes us to the future, in the distant 2200 year. You are still Nova, a special agent of the secret service. Again you have to save humanity, now from an external threat. The first 4 levels of the game can be played in any order. As before, you are armed with a boomerang, but there is an opportunity to beat the enemies in a different way. In each of the initial levels, you can go into the door, fight the dragon boss and get one of the four "cyborg suits" for the victory. Each suit provides weapons and additional abilities (climb walls, swim, fly, defend against enemies and bullets). The energy for the costume needs to be replenished, collecting bonuses along the way. You can also, finding prizes, improve the characteristics of the hero so that he can throw a boomerang on. A great, hard-shot action movie, which will never get bored of playing.
In Japan, the game was known as Captain Saver. The name change was due to some problems with the first part. Originally Taito released in Japan the game Power Blazer, in which a short man in a helmet and with a boomerang ran around the levels performed in the children's entourage. The game was rather boring and did not attract much attention, so the developers decided to work on the bugs, releasing a revised version for the US market. The game was called Power Blade and had quite a lot of differences in the gameplay, level design and game graphics (in particular, the hero changed: instead of the youngster in the helmet, we got a brutal uncle, similar to Arnold Schwarzenegger). A year later, Power Blade 2 was released in the US, but under this name the game could not be released in Japan, since there was no first part. Therefore, the game was renamed Captain Saver, which was a simple localization of the game and was not subjected to significant changes (only the language of the game and the main menu screen changed). Power Blade 2 went on sale in 1992, when NES was already in the shadow of 16-bit consoles. Because of this, the game also did not become popular in other countries.

December 24, 2200 on Christmas Eve, the US president received a message from the head of Delta Foundation Corporation with an offer to buy a new cybernetic soldier whose capacity marked the beginning of a new generation in the development of combat robots. In case of refusal from its acquisition, the cyborg will be sold to the government of another state, than it will pose a threat. The answer must be made within a week.
The Government of America comes to a decision about the necessary liquidation of this cyborg as well as the entire corporation that created it. On the mission sent security officer Nova, who must infiltrate the building of the Delta Foundation and deal with the sudden threat. They have to manage us.

The game is a platform 2D action. We have to overcome six levels of the game, the first four of which can be played in any order. At the end of the level, we are faced with a battle with the boss, defeating which we can begin to continue our mission.
Nova is armed with a boomerang, which he can throw in eight directions. Weapons can be improved by selecting bonuses: over time, the range of the boomerang will increase, it will be possible to throw a few in a row, and it will also become fiery. The lower part of the screen gives us information about the current level of the hero's health, the charge of his costume, the boomerang charge, the remaining time, the number of zones at the level, the number of items that restore health and charge of the suit, and the remaining lives. The hero can jump and perform a tackle, which is required for passing the levels and finding secrets. Also during the game in each level, having defeated an optional dragon boss, you can get a new suit for the character that will give him this or that ability. Our hero learns to climb walls, swim, fly, and also defend himself against enemy bullets with the help of two small androids flying around him. These suits coolly increase the replay value, compensating for the overall linearity of the game. The game will often jump through spikes on narrow platforms, fight with enemies who have a lot of health and a strange algorithm of behavior. All these factors make the game difficult, but completely passable.

Control in the game is quite simple: the cross is movement, the button B is the boomerang throw, A is the jump, the down is + A is the tackle, Select is the restoration of health with the help of the object. Also, if you hold the direction in a certain direction and press B, then the character will throw the boomerang exactly there. In the pause menu, pressing up and down, you will change the available costumes. Management is very responsive, so if you miss somewhere, you can only blame yourself for it.
Graphics
The game is quite ordinary graphics with a darkish palette and in general there is nothing outstanding for 1992. However, the average schedule of developers compensate for the excellent design levels: here you and the various lifts, and blades coming down from the ceiling, and platforms in the form of caterpillars, whose movements must be remembered to pass the level, as well as rooms with the presence of water. And if the level design does not cause criticism, then the design of the opponents depresses. Most of the goals for our boomerang are incomprehensible cannon balls, holes that throw capsules out of which appear rectangles with a chaotic order of movement, robots for no apparent reason running back and forth, as well as gates that release bubbles. Not too diverse, although the eyes do not blister.
Music and sound
Music - this is what really decorates this game. All tunes are perfectly matched and executed in a rock style. Especially memorable is a melody from the third level - a real romance, combined with the desperation and intensity of everything that is happening. As for the sound, it's on the level. So it should be in the game and the effects are not strained or annoying.

Stages - these are the houses that you need to blow (for this you just need to pass the level). There are five houses, in the first four you can go in an arbitrary order (although it's better in order), at the last - after these four, and after the fifth one is still a dungeon. There are levels of rooms fenced with doors.
Costumes. On each of the four first levels in the middle of the stage there is a door behind which the iron dragon lives. For the victory over him they are given. The trick is that if you wear them (pause ↑ or ↓), the hero gets different possibilities: creep along walls and ceiling, swim, fly, block enemy shots. In some places without them simply can not do, which is why it is better to blast houses at home in order.
The first house, seven rooms. In the third under the spikes roll (↓ + B). The dragon lives in the fifth room, "crawling" a suit. In the sixth place, first stand in the middle of the site to see electricity in advance, then in the blind ceilings look for bricks, they are broken by boomerangs. In the seventh, it's better to creep across the ceiling. The boss is a green devil with turntables blocking shots. It may seem difficult, but if you immediately hang in the middle on the ceiling, you can win without even injuring yourself.
Second house, eight rooms. In the first and second rooms, beware of the ceiling. Do not jump down until the floor appears. Underwater, the hero's actions slow down, take this into account when jumping. The dragon also lives under water, ideally being killed from the ceiling. The suit of the diver. When you go on the platform, often crouch and disembark at the sites. In the last eight room, walk on the ceiling. Boss - a flying cyborg, shoots homing missiles. The fish are swimming on the floor. To the point of indecency is defenseless when attacking from the ceiling.
The third house, seven rooms. Dragon in the third room. This time it jumps very high, just roll under it and shoot boomerangs. Flying suit. In the next room, be sure to try out a new thing, flying around the fan system. In the fifth room it is better to go on the ceiling. The boss is a wicked, quick, humanoid creature. The hardest boss in the game. Creeps on the walls and ceiling, shoots triple stars, completely unpredictably jumps, and even on the perimeter of the room are running electrical discharges. No tactics, beat it with boomerangs and jump in time. Closer and closer to the passage. It remains only to understand the notations on the screen and the system of stages.
The fourth house, seven rooms. Here under the water pass only by a diver. Do not miss the dragon in the fourth room. Costume with locking turntables (like the first boss). In the sixth room it is more preferable to ride a horse. In the seventh, slip into the aisles, when the floor is lowered, otherwise it will crush. Boss - rest of the soul and body. Two peasants - an acrobat, do not shoot anything, jump quite predictably and sometimes make rolls through the whole screen, but they are very easy to jump over.
The fifth house, ten rooms. It will be interesting to climb the creeping sites. In the fifth room we are waiting for an interesting meeting with a nice tsekrushnitsey Jacqueline, which sheds light on everything that happens. It turns out that the entire Delta Foundation is run by an alien bastard, and the cyborgs allegedly invented there are his servants. Did not fail the flair of defencists. Next, except the tracks from snakes creeping over the abyss, nothing special will happen. Boss is a green flying demon, throwing bombs. Very tenacious, but in a blocking suit is not very dangerous, although when he starts running down, there is simply no place to escape from him (except for the ceiling, if you cleaned it of slugs). Mast give.
Dungeons, fourteen rooms. The red sex is passive dangerous - it sucks. It is better to crawl over it above the ceiling, because in some places there are large, clenching claws. The level is not really long, because from the sixth to the twelfth rooms are very small (input and output on one screen). In the thirteenth, use the flying suit. In the latter, move on the ceiling. It's naive to believe that the main one will come out right away - first you have to kill all the reptiles from the previous levels. After each make up life and energy, the boss of the third stage extinguishes in a blocking suit.
The last stronghold of evil is the corrupt leader of the corporation. The lizard-like monster appears in different parts of the screen, gives a volley and disappears again. The floor is sucking. But the boss is weak. The lock suit makes him simply defenseless and a happy ending is inevitable.