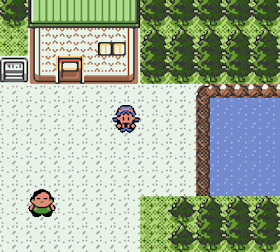 Genre: Role-Playing (RPG)
Perspective: Bird's-eye view
Visual: 2D scrolling
Pacing: Turn-based
Gameplay: Japanese-style RPG (JRPG)
Setting: Fantasy
Published by: Nintendo of America Inc.
Developed by: Creatures, Game Freak
Released: 2001
Platform: Game Boy Color (GBC)
As in Pokemon Red, Blue, Yellow, Gold and Silver, the player travels through the fictional world displayed from above. As the game progresses, the player opens up new locations for further exploration of the game world. In many locations - in forests, caves, in the fields, in the mountains, etc., various kinds of Pokémon live. When a player passes through such places, a wild Pokemon can attack him, and then a fight begins. A player can also call another Pokémon coach to fight. The battle takes place on a separate game screen. When the fight begins, the player's pokemon fights with the enemy Pokémon. During the battle, you can perform four actions: use one of the abilities of the Pokemon in battle, use the item from the player's inventory, change the fighting Pokemon to another available from the player, or escape from the battle (you can not escape from the fight if the player is called to fight by another Pokémon coach ). Each Pokémon has health points - if they are over, the Pokémon can not fight until he is cured. Having defeated another Pokemon, the Pokémon player gains experience. Having gained a certain amount of experience, the pokemon rises to a new level. When a new level is reached, the characteristics of the Pokémon increase, and sometimes the Pokémon can learn a new ability. When certain conditions are met (for example, at a certain level, when a certain object is used, etc.), Pokémon can evolve into their developed forms.
An important element of the gameplay is the capture of new Pokémon. You can catch only wild Pokemon - Pokemon, belonging to other coaches, you can not catch. During the battle, a player can throw a Poké Ball (Poké Ball) into a wild pokemon - a pocket device in the form of a ball, allowing you to carry even the largest Pokémon in your pocket. If the wild Pokemon does not break out of the pokeball, then he goes to the player, otherwise he will have to drop the pokeball again. The success of the capture depends also on how little the wild Pokémon has in his life points and how strong the pokéball is.

In Crystal, there were many changes compared to Gold and Silver. At the beginning of the battle, the animation of the enemy Pokemon is shown - each type of Pokémon has its own animation. For the first time in the series, it was possible to play for the girl, and not just for the boy, as it was in the previous games of the series. Almost changed the design of some characters and Pokémon. A new story line was added, related to the legendary Pokemon Suicune. The biggest innovation is the Battle Tower - a location where particularly complex Pokémon fights take place according to certain rules.
‹
›
Home
View web version