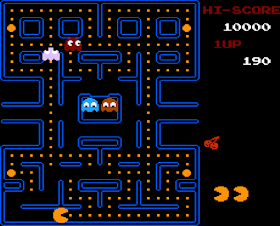 Genre: Action
Perspective: Top-down
Visual: Fixed / Flip-screen
Gameplay: Arcade
Setting: Fantasy
Interface: Direct Control
Published by: Tengen Inc.
Developed by: Namco Limited
Released: 1989
Platforms: Nintendo (NES), Atari 7800
A famous game from the company Namco. Classics for all time. We control Pac-Man - a round creature with a big mouth and mania to eat everything. On each screen-level a lot of points are scattered, the task of Pac-Man is to eat them all. To interfere with the hero will be strange ghost creatures, four in number. In the usual case, their touch for the character is disastrous. But if Pakkman swallows one of the large circles, he will become invincible for a short time and will be able to devour any enemy in the blink of an eye (true, then the ghost will reappear). It's funny that the enemies are afraid of the dead Pekman and get away from him that there is urine. Although the rules seem simple, the game is unrealistically addictive, so that you will not come off.
‹
›
Home
View web version