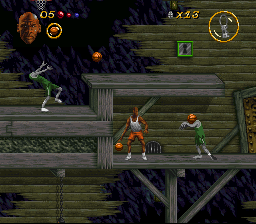 Genre: Action
Perspective: Platform
Published by: Electronic Arts
Developed by: Electronic Arts
Released: 1994
Platform: Super Nintendo (SNES)
While Michael Jordan is going to train at the gym, he discovers that all his basketball comrades have disappeared ...
A basketball ball suddenly falls through the window, with a message written on it. The message, signed by a certain Dr. Max Cranium, informs Jordan that his friends have been abducted, and that to save them he must go to the museum and enter the Egyptian antiquities room.
Jordan goes, and discovers a secret passage that leads to a large underground prison ... the champion will have to venture there to save his comrades.

The game plays like many other platform games of the era, with clichés such as keying up or fighting enemies with several different techniques.
Michael Jordan's weapon is a basketball ball, which can turn into several kinds of bullets with supernatural abilities; We have for example the frosting ball that covers the ice surface and makes it so slippery, the bomb-ball that makes a big explosion, and so on.
Jordan can also do a slam dunk as a secondary attack, which can be used to activate "powerup" baskets and multiple savepoints.