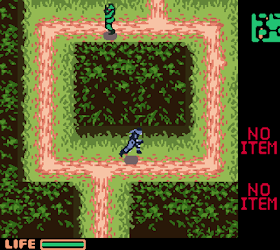 Genre: Action
Perspective: Top-down
Gameplay: Stealth
Narrative: Spy / Espionage
Published by: Konami of America
Developed by: Konami Computer Entertainment Japan, Tose Co.
Released: 2000
Platform: Game Boy Color (GBC)
Stealth-action with a view from above about the steep saboteur Snake sneaking around the base of the international super-evil. The version for GBC is not a port or a copy with Nintendo or MSX, but a separate original game. In the menu, we immediately seduce the Training item, in which we fall in love with the game, not yet starting to play. For several days, you can devote training missions from imperceptible penetration to level stripping with only one weapon, and then go through again, but for a while. Thanks to Game Boy, the game looks prettier and more diverse than on older Nintendo consoles and MSX. Briefing us is still only text on the screen, but there are small videos ("video inserts"). At the same time, the biggest problem with this version is a bunch of dialogues and accompanying episodes (as on IBM PC). Although sometimes there is a relative scenario emptiness when we are forced to run from floor to floor for different boxes, all this is a dreary thing that you do not want to remember, but you'll press a button "rewind" much more than a shot button! Especially can bother with the long "heart-rending" stories, which tells each boss after the victory over him. Bosses are not very many (in comparison with the PC version) and they are found no more often than on versions for other consoles, but they are also (in the style of the rest of the Metal Gear) killed only by their personal tactics. Now you do not need to go over the cards in front of the door in the gas room! Each new card replaces all previous ones. With the preservation of things are better. The game is automatically saved in certain places according to the scenario. On the GBC buttons are few! Therefore, weapons and objects, and walkie-talkies were crammed into the inventory. From this, you can confuse the button "go into inventory" with the button "sit down" and which arrows change items, and which - weapons. If we weigh all the "FOR" and "AGAINST", maybe this is the best Metal Gear from all 2D. The most modern of them, with a minimum of flaws and a maximum of merits.
‹
›
Home
View web version