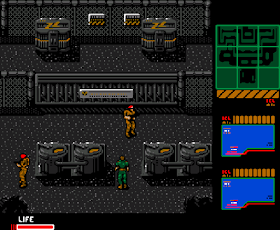 Genre: Action
Perspective: Top-down
Gameplay: Stealth
Setting: Sci-Fi / Futuristic
Narrative: Spy / Espionage
Published by: Konami Industry Co.
Developed by: Konami Industry Co.
Released: 1990
Platform: MSX
After the events of Metal Gear, Solid Snake resigned, however, for a little while. In 1990, the world once again needed a hero. The new FOXHOUND commander, Roy Campbell, sends Solid to Zanzibarland, a fictional country somewhere in Central Asia, in order to pull out a scientist kidnapped by terrorists. And a little later he killed Big Boss again and blew up a new model of Metal Gear D.
Gameplay Metal Gear 2 stood a step above the first part. It was still a stealth action with all the attributes of the series, but now the guards have become much smarter, and Snake himself has learned a couple of new tricks. If in the first part the guards saw only the line ahead of themselves and were deaf to death, now they have learned to look around and saw a world with a viewing angle of 45 °, and also heard not only shooting, but also footsteps close to oneself. Snake, in turn, learned to crawl quietly on all fours, attract guards with noise and quietly cut them, bypass infrared traps and cameras, and also added in the arsenal.
‹
›
Home
View web version