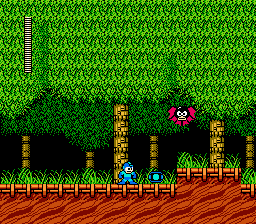 Genre: Action
Perspective: Side view
Visual: 2D scrolling
Gameplay: Platform, Shooter
Setting: Sci-Fi / Futuristic
Art: Anime / Manga
Published by: Capcom U.S.A.
Developed by: Capcom Co.
Released: 1989
Platforms: Nintendo (NES), Game Boy
A very successful continuation of the first game, thanks to which the series became popular. Here Mega Man will have to grab already with eight bosses. Also, he will receive improved devices to overcome obstacles, and the player will first show the fortress of the main villain, Dr. Weil. There were passwords and the ability to replenish the energy during the battle, which is why the complexity is less than in the first part. Graphics from the time of the original source became prettier, the soundtrack is generally one of the best in the series. The gameplay, if not to consider new types of weapons, remained unchanged, however, as in the subsequent parts.

1. The boss is pretty simple, especially on EASY. It is very easy to destroy it with simple bullets, but it can also be thrown by leaves from WOOD MAN ... Trophies: "air gun" and flying platform.

2. The fifth staircase leads to the exit, but from the extreme upper staircase you can get to the precious life with the help of a flying platform.
3. Against the boss, use an air gun. Trophy: a cannon that shoots bombs.

4. Boss - a fierce robot, can stop time and shoot bursts, but does not represent a serious obstacle. Running back and forth across the battlefield, it's especially interesting to catch this creature on a CRASH MAN'a bomb. Trophies: an elevator and a thing that "freezes" enemies.

5. On the third from the beginning of the shelling of the screen, fall into the right pit, get a lot of useful bonuses.
6. The boss. If you use the weapon FLASH MAN'a, then this famously jumping eccentric will begin to decrease energy. Trophy: Boomerangs.

7. There is a level at the level where there is a "hole" in the wall, and in the hole there is a capsule of life. Use the flying platform to get it.
8. The boss is afraid of boomerangs. Trophy: a cannon that shoots with blades.

9. Boss is a diver. You can finish off with a saw. Trophy: "water bullets". Level 7. Heat Man
10. Take care of the flying platform, otherwise do not fly over the river of lava.
11. The boss, the hot man, you must extinguish with water, that is, with water bullets. Trophy: "fiery weapon" (hold down the shot button and, when you become very cool "blink", release).

12. Strong armor boss allows him to stay very long, remaining alive. But having saved up the energy of the "fire bullet", it can be defeated with one shot. Trophy: shield of leaves. Here I must make a small digression. This shield will protect you while you are standing still. You can return to the level (now deceased) of the first boss, reach the birds and get up with this shield, without moving. The chicks will fly on him and die, giving you bonuses. Among them there are life and capsules of life.

13. The boss can be defeated, like the previous one, by "fire bullets", having saved the energy of the shot.
Level 10. Fortress, somewhere between the beginning and the middle:
14. There are many bosses. A whole cloud of flying robots. Shoot them with boomerangs.

15. The boss is a tank man! Accumulate the energy of the "fire bullet" and shoot at it. Then finish with ordinary bullets.

Level 12. Fortress, between the middle and the exit

16. Now the most difficult in the whole game! Bosses are guns. To begin with, you must have a full charge of bombs and a full line of health. First, switch to bombs, climb to the central platform and destroy the central left gun. Then jump up and, in the jump, break the "average" cannon (it to your right and is attached not to the wall, but to some partition). Drop down and ruthlessly deal with the lower right gun. Using the elevator "from the fire boss", get to the left upper mechanism and destroy it. Now finish the last cannon. If you did everything right, then you will not have more bombs, and Dr. Willy has guns.

Level 13. Fortress, at the exit

17. Boss - Dr. Wili on his flying ship. He has two (!) Energy bars. First, store energy for a shot of a fireball and "take off" the first ruler. Then finish with boomerangs or blades.

18. The final boss. This is a flying green mutant, which (like) does not care (it's good to be a mutant). No weapon, except the "water bullet", does not act on it.
‹
›
Home
View web version