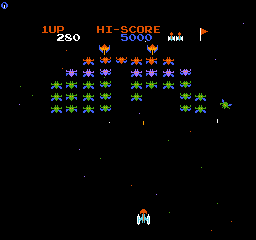 Genre: Action
Perspective: Side view
Gameplay: Arcade, Shooter
Visual: Fixed / Flip-screen
Setting: Sci-Fi / Futuristic
Published by: Namco Limited
Developed by: Namco Limited
Released: 1991
Platform: Nintendo (NES)
The game became the ancestor of the popular series "Galaxian", the games of which continue to be released to this day:- "Galaxian" (Arcade, Apple II, Atari 400/800, Atari 2600, Atari 5200, Bally Astrocade (Galactic Invasion), Coleco VFD table top, ColecoVision, Commodore VIC-20, Commodore 64, MSX, ZX Spectrum, NEC PC -8801, Famicom, Sharp X1, IBM PC, Dreamcast, Mobile Java, Virtual Console.)- "Galaga" (Atari 7800, Famicom / NES, Game Boy, GameTap, MSX, SG-1000, TRS-80 Color Computer.1981).- "Gaplus" / "Galaga 3" (Arcade, Commodore 64, Sony PlayStation, Nintendo Wii, Virtual Console, 1984).- "Galaga '88" (Arcade, PC-Engine, Game Gear, Virtual Console, 1987).- "Galaxian 3" (Arcade, PlayStation, 1990).- "Attack of the Zolgear" (Arcade Game Theater 6. 1994), an addition to "Galaxian 3".- "Galaga Arrangement" (Arcade, 1995).- "Galaga: Destination Earth" (Windows, PlayStation, Game Boy Color, 2000).- "Galaga Legions" (Xbox 360, Nintendo 3DS, PlayStation 3. 2008).- "Galaga Legions DX" (PlayStation 3, Xbox 360. 2011).- "Galaga 3D Impact" (Nintendo 3DS. 2011).Subsequently, the game "Galaxian" was ported to many home computers and gaming consoles, and was repeatedly reissued as part of the collections "Namco Museum". Several game remakes have been released for gaming machines and home systems.In the game, we control the spaceship at the bottom of the game screen. It can only move horizontally: to the left or to the right. At the beginning of each level, the space above the ship is filled with a certain formation of enemy ships, which moves back and forth horizontally and slowly descends. Our task is to destroy all enemy ships until they have descended too low and have not deprived our ship of maneuverability. Periodically, individual enemies fly out of the general formation and fly to us on bizarre trajectories, carrying with them a lethal charge. Therefore, it is better to beat them before they start maneuvering and diving down. After the destruction of all enemies, we move to the next level.It should be noted that the game became "Galaxian" became not only the ancestor of the eponymous series, but also the first game of this genre. It affected not only the development of a particular genre, but also the entire gaming industry as a whole. I will not put my valuations in the game, since such masterpieces are priceless and can not be discussed 20-30 years later from the standpoint of modern game projects. We can only say that the game is immortal. Many thanks to the company "Namco" for such a great invention and the impetus that it gave to the entire console industry in those years!
‹
›
Home
View web version