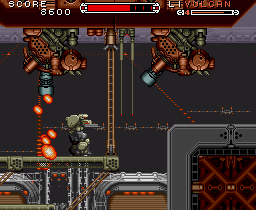 Genre: Action
Perspective: Side view
Art: Anime / Manga
Gameplay: Platform, Shooter
Vehicular: Mecha / Giant Robot
Setting: Sci-Fi / Futuristic
Published by: Konami
Developed by: NCS Corporation
Released: 1992
Platform: Super Nintendo (SNES)
Classics of Assault Suit was popular on numerous systems, but it was on Super Nintendo that she really declared herself, proving that the Mech games can be perfect and very interesting. This game combines at the same time the power, ease of management and great killer of your giant robot. Excellent dialogue inserts during tense and dangerous moments, versatile level modes, powerful weapons worthy of giant Mechs, as well as the possibility of pumping all of the presented weapons made the game a real masterpiece in the early days of the Super Nintendo console. In this military epic, you need to perform various tasks, one of which affects the end of the whole story. All the confrontation that narrates throughout all levels perfectly allows you to get used to the whole tragic cataclysm that has happened, to all the militant events, and most importantly to the role of the pilot of the giant machine. Quite an amazing implementation of the game with two endings. It is under her influence that subsequent, maybe even more masterpiece, representatives of giant robots will appear, such as Metal Warriors with new ideas and possibilities, as well as a very popular version of the game Front Mission - Gun Hazard with a developed system of RPG elements. A trio of unconditional hits among mechanoid shooters, recommended to all fans of giant robots on the Super Nintendo.
This is a powerful shooter with the participation of robots, I'm curious that a year later, in 1993, this game was reissued KONAMI and was called Cybernator!
‹
›
Home
View web version