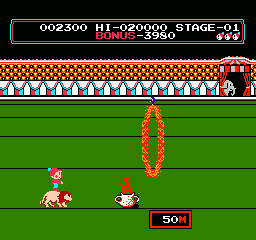 Genre: Action
Perspective: Side view
Visual: 2D scrolling
Gameplay: Arcade
Published by: Soft Pro International
Developed by: Konami Industry Co.
Released: 1986
Platform: Nintendo (NES)
We play a clown named Charlie, who must perform various tasks in six levels of the game. Collecting bags of money, performing dangerous stunts, avoiding enemies, passing levels, Charlie gets points. After passing through all six levels, the game begins again, but the gameplay becomes faster and more complex (the levels themselves remain the same). At the end of each level, Charlie must jump on the curb.
The game process is quite different in levels, we will try to briefly describe it:
Jumping through burning hoops. Charlie rides on the lion, and in the process of moving up the level must perform jumping through burning hoops.
Walking on the rope. Charlie walks along a tight rope. He is hindered by monkeys trying to push him from the rope.
Springboards. Charlie jumps from the springboard to the springboard, avoiding the fire and knives that other circus performers throw at him.
Charlie moves standing on the ball, and must jump from the ball to the ball, and also avoid various obstacles.
Horse racing.
Flights on the trapezium. Charlie needs to jump from the trapezoid to the trapezoid. This level contains a fragment of Strauss Waltz "On the Beautiful Blue Danube".
The version of the game for the third level of NES offline "diving boards", but there are two game modes: "A" and "B" (in the mode of «B» repeated with increasing levels of complexity).
The game has many secrets and tricks, here are some of them:
‹
›
Home
View web version