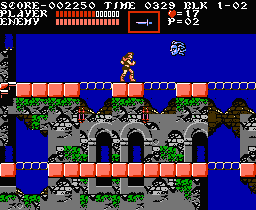 Genre: Action
Perspective: Side view
Visual: 2D scrolling
Gameplay: Arcade, Platform
Setting: Fantasy
Narrative: Horror
Published by: Konami
Developed by: Konami Industry Co.
Released: 1990
Platform: Nintendo (NES)
"Castlevania III: Dracula's Curse" is a prequel to the first part of the series "Castlevania", which takes place two centuries before the events of the original game. The main actor is Trevor Belmont, the ancestor of Simon Belmont. In 1476, Count Dracula appears in Europe, and the Belmont family, exiles from Wallachia and vampire hunters, are again called upon to fight the impending threat.
A great innovation in the game is the ability to play other characters, but with you you can take only one satellite. So, now there are four heroes to choose from: Trevor Belmon, Grant Danasty (acrobat), Sifa Belnades (young sorceress), Alucard (son of Dracula and Trevor's father). Each of the characters has different abilities, unique weapons and objects.
"Castlevania III" again returns to the game process of the first part, but now the game has already appeared non-linear plot. In several places the player has to make a choice - which way to go further, which will affect the final ending of the game.
The game has two main ways, which last for fifteen levels, some of which are optional. Each line occupies nine levels (plus one - optional). The upper path passes through the lake to the main bridge and the gates of Dracula Castle, the lower path passes through underground tunnels and caves. In addition, the lower path has its own little storyline. Both ways again converge in the main hall of the castle.
As in the first part, after the game is scheduled Hard Mod, you will start the game again, but with increased complexity. Enemies will become stronger, instead of the Jellyfish heads, chaotic skulls flying around the air will fly. In this case, all enemies in contact will take more energy from you.
It is worth noting that the series of games "Castlevania" - one of the most popular in the gaming world in general, not only in its console part. How many games have been released for the most different gaming platforms: Family Computer Disk System, Nintendo Entertainment System, Commodore 64, Amiga, DOS, Microsoft Windows, Game Boy Advance, AT & T Wireless mMode Network, Virtual Console! Until now, one way or another from year to year appears something that "keeps afloat" this famous series of games.
‹
›
Home
View web version