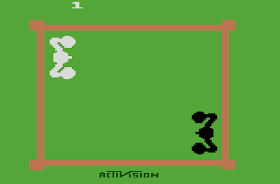 Genre: Sports
Perspective: Top-down
Visual: Fixed / Flip-screen
Gameplay: Fighting
Interface: Direct Control
Sport: Boxing
Published by: Activision
Developed by: Activision
Released: 1980
Platform: Atari 2600
The game is very simple, just that the player presses the joystick to trigger the punch command, and use the directional stick to position the fighter to The right or left arm. With each punch in the opponent's body, a bonus point is counted. Win whoever hits the opponent more often in three minutes. The ring is seen from above, and the fighters are identified by the colors black and white.
‹
›
Home
View web version