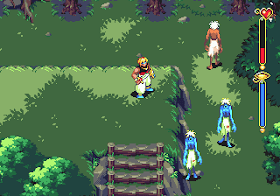 Genre: Action, Role-Playing (RPG)
Perspective: Top-down
Gameplay: Arcade, Puzzle elements
Setting: Fantasy
Art: Anime / Manga
Published by: SEGA of America
Developed by: Ancient Co
Released: 1995
Platform: SEGA Genesis / Mega Drive
The story begins with the fact that two wizards of the Oasis kingdom - Reharl and Agito - simply killed each other. After their battle, there were two handcuffs (gold and silver), which for a long time were considered lost. One day, Prince Ali found a golden cuff, revealing a mysterious chest on a desert island. Obviously, this was the prince's hobby: searching for artifacts and other values. Ali immediately put on his hand a golden handcuff, and then, out of nowhere, appeared a gin, who ordered to find four spirits and himself a silver cuff. The ground underfoot starts to shake, the rocks crumble, closing the exit, but Ali has time to leave the islet on the boat. And then the game action begins. As you may have guessed, you get the hard part of a prince searching for a silver cuff throughout the kingdom.
The first thing that catches your eye is the cartoonish graphics, saturated with bright colors. The developers considered it appropriate to use such a graphic design and were not mistaken. This style gave Beyond Oasis freshness and diversity compared to other representatives of this genre. But what's even more amazing is the animation. Movements are free and easy; jumping, running, crawling are very plastic. Perhaps there is
a couple more games that will be able to compete with Beyond Oasis in this regard. To say that it is qualitative would mean a little understatement. One of the main factors of the success of this project can rightfully be considered a great animation and colorful graphics.
First you run through the kingdom Oasis with one small dagger, which, it would seem, can not cause a tangible damage to the enemies. But, when you master the comboes and special techniques, this little knife will turn into a very formidable weapon. In addition, it can be used many times. As you pass, you are offered more and more sophisticated weapons of murder, such as a wide sword, a fiery bow, and also very powerful bombs. But opponents are becoming more dangerous - giants, zombies, winged demons and other freaks. In fierce battles, your enemies manage to shred one another, which will help them to bring them up a bit. You need not forget about the health indicator. Raise it can be food, dropping out of monsters or stored in chests. The shortage of magical energy can also be increased by specially created food for it. Food varies in magnitude impact. For example, bread will restore a pathetic quarter of your health, and a solid ham - all to the last drop.
Particular attention should be paid to the spirits, which, according to the plot, you must find and join with them in a difficult battle against the owner of the silver cuff. There are four spirits in total, and each one will get harder and harder.
The first spirit - the water nymph - will appear at the end of the first dungeon. She can treat you, turn into a tornado and freeze enemies. After another few tens of minutes you will find a fiery spirit, one of the strongest in the game. His fiery breath, impressive explosions will not let you perish in a fierce battle. But spirits can only be called in special places. For example, a fiery demon appears only near a place with fire (for example, torches hanging on dark walls of dungeons). A nymph, as you may have guessed, near the area with water, or directly in it. Most striking is the uniqueness of the spirits, the diversity of their actions. From the ability to use them is directly related to the passage of the game and the pleasure you receive.
Spirits are indispensable in fighting bosses: a fire-breathing skull, a giant spider, or a powerful serpent. You manage all this wealth without straining, absolutely at ease. Thoughtful management allows you to play at a pace that you choose: starting with leisurely actions and ending with creative jerks. A map available in the game will give a complete picture of your whereabouts and the point at which you need to get to.
The music blends harmoniously with the overall rhythm of the passage of Beyond Oasis and quite clearly reflects the gameplay happening on the screen (after all, the composer Beyond Oasis was the great Yuzo Koshiro - the creator of the music for the Bare Knuckle series). The variety of melodies gives each level its own unforgettable shade. Sounds also perfectly fit into the overall plan for the extermination of enemies.
As a result, Ancient got a great role-playing adventure with a chic animation, comfortable control, great music and a unique gameplay. Pleasure is guaranteed. In Beyond Oasis everyone should play!

Pressing the gamepad twice in a row in one direction - running; The most powerful directional strike is obtained precisely from a take-off.
Button A - launch of the Armlet Ball; The use of magic of the evoked spirit (three options: single, double fast or long); Cancel selection in the menu;
B - use the selected weapon, select an item in the menu;
C - in the pressed position - squatting; Quick depression - jump;
START - call the menu, reset the object from the inventory and arsenal;
Combination MODE + B - return the previous weapon;
X - map view;
Y - weapon selection;
Z - selection of objects.
Special combat movements with a dagger:
Cantrip - rapid push of button B;
Slashing blow - pressing B with a slight delay;
Circular attack - holding the button B, turn the joystick clockwise;
Flip - press up, down, up, while holding button B.
With food themselves will understand, in all there are 13 of its species. Meat restores the standard of living, vegetarian food - the level of magic. There are products that affect both parameters.
Hearts increase the maximum bar of life and magic, but reduce the status.
Four more magical items help the hero in the world to self-medicate, and also to restore magical energy.
‹
›
Home
View web version