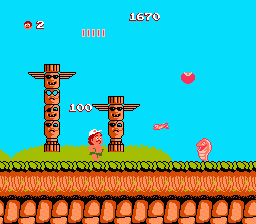 Genre: Action
Perspective: Side view
Visual: 2D scrolling
Gameplay: Arcade, Platform
Published by: Hudson Soft USA
Developed by: Hudson Soft Company
Released: 1988
Platform: Nintendo (NES)
Quite a well-known game-platformer. Good graphics (for NES) and unpretentious music convey the sensations of summer and sun. But you can not relax, enemies all around. You, like the brave savior of your girl, make their way to the cherished goal. Our hero desperately needs food, while he also has accelerated metabolism (metabolism), so you need all the fruits along the way. At the levels you are given weapons, unfortunately, not everywhere. Complexity is fully expressed in the proverb: the further into the forest, the thicker the partisans. From level to level, monsters are getting angrier, and after going through four rounds, we will meet with the main "partisan", the thickest - the boss. The levels in the game are insane, so you do not have to be bored. The Japanese version is called Takahashi Meijin no Boukenjima, and is not distinguished by anything other than the hero's name.
‹
›
Home
View web version