The Legend of Zelda: A Link to the Past (SNES) 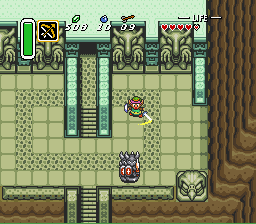 Genre: Action
Perspective: Bird's-eye view
Gameplay: Metroidvania, Puzzle elements
Art: Anime / Manga
Interface: Direct control
Setting: Fantasy
Published by: Nintendo of America Inc.
Developed by: Nintendo EAD
Released: 1992
Platform: Super Nintendo (SNES)
Used in the previous Adventure of Link game, a two-level scheme in which the movement around the game world was shown as a schematic map, and locations and battles were displayed in the platformer mode, caused multiple discontent among the players, and the project manager Miyamoto decided to use the game mechanics of the first part, with the mapping Game space in the long term "from the side".The changes mainly affected the management (Link had the opportunity to move diagonally), minor changes occurred with the weapon of the game character (arrows became an independent object and when archery was no longer spent precious stones Rupees, as it was in the first game). Attack with a sword could hit opponents, surrounding the game character, and not only facing him, which made it easier to fight in conditions of numerical superiority of monsters. There was an indicator of the level of magic (which was borrowed from Adventure of Link).The game introduced new elements to the series, which later became part of the recognizable style of The Legend of Zelda series: multi-level dungeons, new types of equipment (boarding cat, speed boots). Finally, a scalable map was introduced, allowing the player to easily navigate in the surrounding world and simplify the search for key characters and objects.Labyrinth maps, like in the first game of the series, have to be tracked independently, just like magical compasses indicating the location of the main objects hidden in the dungeon.

The main hero of the game is a boy named Link, who lives in the beginning of the story with his uncle in the house south of the castle of Khairul. One evening, Link receives a telepathic message from Princess Zelda, who asks for his help. Zelda is imprisoned in the castle by an evil sorcerer named Agahnim, who executed her father, King Khairul, and seized power in the country. Agahnim plans to destroy the seal imposed centuries ago by the Seven Sages, and to free Genon, the Prince of Darkness. In this he is helped by royal soldiers, whom he controls with the help of magic.Uncle Linka goes to the castle to save the princess, but gets a fatal wound and dies. Link releases Zeld from the dungeon on his own, but escaping the princess from the prison will only give Link additional time for the location of the relic and will delay Agahim for a long time so that plans do not come true. After escorting Zelda to the secret sanctuary, Link continues his quest, the mentor in which for him becomes one of the descendants of the Seven Sages, a hermit named Sahasrahla.The only weapon able to withstand the dark magic of the Aghamnama is Master Sword, an ancient magic blade created to fight "with those in whose heart evil has settled." Sealed in a pedestal, a magic sword will allow you to take control of only the real hero. To prove that he is worthy of this sword, Link must find three magic pendants hidden in different corners of the kingdom of Khairul. However, having received the sword, he finds out that Agahnim discovered Zelda's refuge, kidnapped her and transferred him to the World of Darkness (Dark World). Link follows them, in front of him awaits a fight with Agahnim, and after - and the prince of Darkness Ganon himself.