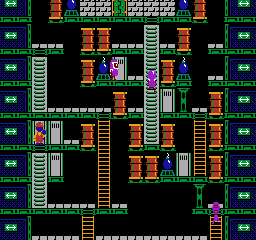 Genre: Action
Perspective: Side view
Gameplay: Arcade, Platform, Puzzle elements
Published by: Nintendo of America Inc.
Developed by: Nintendo Co.
Released: 1985
Platform: Nintendo (NES)
Simple, entertaining game with Mario brothers in the lead role. At this time, a plumber with his brother engaged in the demolition of buildings. Firmly holding a hammer in his hands, they were smashing doors, stairs and columns. Every level (out of 100) is divided into floors. Due to the fact that here Mario can not jump, the player will have to carefully calculate the order in which to break objects. If, for example, ahead of time break the ladder, you will not be able to climb to the desired floor. In addition, at the level you need to run away from enemies and their attacks. Despite its simplicity, the game may well inspire you.