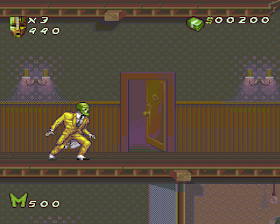 Genre: Action
Perspective: Side view
Published by: THQ Inc.
Developed by: Black Pearl Software
Released: 1995
Platform: Super Nintendo (SNES)
The fact that SNES perfectly holds the frame, in whose library you can find many worthy implementations of the cult films of the past, is confirmed not once again by this game, made according to one of the best adaptations of such a popular comedian actor as Jim Carrey. There he played one of his best roles, surpassing even himself. According to the plot, a timid bank clerk finds an old mask with a magical power, due to which his life changes dramatically. He feels free and omnipotent, worn like a whirlwind, nothing and no one is afraid, constantly changing guises, bursting into trouble and teasing fate. He does not need to dance an incendiary rumba under the guns of various gangsters. The game has a lot of opportunities that the cult character possessed and switched to Snes from the same movie as much as possible. A lot of humor and positive impressions give just admire this console, which is worthy of implementing such an important and nostalgic for many a film, as well as many other screen versions. Milo's dog can also be found here. Graphically the game looks very good. The sound effects are quite worthy of the hero Stanley Ipkins, hiding under many favorite green mask. Another fairly smart implementation of the game for the movie on Super Nintendo.

Cheat Menu: You must input this code at the Options screen. And you must do it on the first try. If you fail, turn the SNES off and retry again. A, B, X, Y, L, R, L, A, B (L and R are the L and R Triggers, not Left or Right).
Get 99 Lives: Ok go to your apartment and move the couch against the wall,go into the hole that just appeared and ta-da! you have 99 lives!
‹
›
Home
View web version