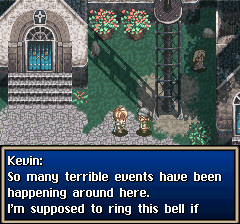 Genre: Action, Role-Playing (RPG)
Perspective: Side view, Top-down
Art: Anime / Manga
Setting: Fantasy
Published by: Namco Limited
Developed by: Wolf Team
Released: 1995
Platforms: Super Nintendo (SNES), PlayStation (PSX, PS1)
There was a lot of new stuff in the game, for example, in the intro, at the beginning of the game the song "The Dream Will Not Die" by Yukari Yoshida sounds, many things are sounded that I was even surprised.Beautiful graphics: reflection on the water, shadows from trees and other things. Cool animation. Good sound. And how does this fit in these six megabytes?But the game still was not published either in America or in Europe. Some people say that this is because of some adult scenes in the game. A few years later, Namco continued the game on the PlayStation, titled Tales of Destiny or Tales of Destiny. Tales of Destiny still remained similar to her ancestor, a young man from a small village goes in search of adventure in order to see the world. Of course, as in many Japanese RPGs, he immediately found himself involved in a not very pleasant story, not for us of course: o). Finally, the game was released in the US, the only difference from the original was the song in the very first intro.
Yes, Tales of Destiny was a good game, but people still wanted to see Tales of Phantasia again, and NAMCO decided to release a remake for the PlayStation. The game was completely redesigned, even the dialogues were rewritten from scratch, a redesigned version of the song was added from the original game, several video clips, several new dungeons were added and also one secret character was present in the game. But this time the Americans were waiting for the same bummer, the game again refused to publish overseas for the same reasons as before.The latest game from the series "Stories" was named after Tales Of Eternia and was released at the end of 2000. In the United States was supposed to come out in late 2001.And, finally, the last game from the series of Tales of Phantasia Narikiri Dungeon was released on color GameBoy'e in November 2000. History is still happening in the world of ToP'a, but some time later. The game tells about a couple of twins Mel and Dio, and about their.
‹
›
Home
View web version