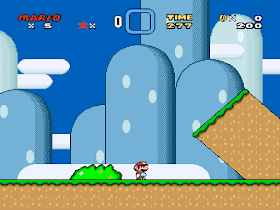 Genre: Action
Perspective: Side view
Visual: 2D scrolling
Gameplay: Platform
Interface: Direct Control
Published by: Nintendo of America Inc.
Developed by: Nintendo Co.
Released: 1990
Platform: Super Nintendo (SNES)
As well as in the previous games of a series the main character — the plumber Mario. The villain king Kupa kidnaps the princess Toadstul and imprisons Yosha's dinosaur in egg. Mario releases Yosha and astride it goes to the lock of the king Kupy to rescue the princess. Enemies on the way are turtles, battleships and other animals. Interestingly that in game there is no enemy (separately from an armor) without abilities which is destroyed by a usual jump of Mario from one blow (For example, the bat is killed Mario from one blow, but it is activated if Mario approached it close, and flies on a curve trajectory.)
The gameplay suffered big changes. Opportunity to use Yosha as a vehicle and its fighting abilities (for example, eating of opponents) became the main innovation. Now Mario can pass the same level twice that wasn't in the previous game. Also, Mario has a spare subject - the subject which is in the top part of the screen in a special small square. Also Mario can collect on 1,3 and 5 lives from one jump. Now, to get to confidential something, it is necessary to take a key and to thrust it into the special lock. At game there is a large number of the hidden secrets, such as reductions of a way, bonus levels etc. In total in game of 74 game zones and 96 exits from them (game adopted reception at the previous Super Mario Bros. 3 and game level it is possible to pass in several ways).

The plot of the game continues the events described in Super Mario Bros. 3. After the rescue of the Mushroom Kingdom, the brothers Mario and Luigi go on holiday, to the Land of the Dinosaurs. However, while relaxing on the beach, Princess Peach disappears. When Mario and Luigi wake up, they go in search of her and soon find a giant egg in the forest. From it hatch a dinosaur named Yoshi, who tells the heroes that his friends were also trapped in similar traps. Soon, Mario and Luigi realize that all these vicissitudes are the work of the villain Bowser and his servants. Together with Yoshi they go to save the princess and friends of the dinosaur.

Koji Kondo wrote all of the music used in Super Mario World, only using the electronic keyboard. Overworld theme from Super Mario Bros can be heard on the map Special zone.Muzyka plays normally on a standard above ground level. She slowed down and there is an echo on the underground level. In underwater levels, the music is played in slow waltz. Levels in the air playing music quickly and vigorously. When riding Yoshi, music at all levels is accompanied by bongo drums, the sound of drums later were transferred to the Super Mario Sunshine, as well as in New Super Mario Bros. Wii and Super Mario Galaxy 2.
‹
›
Home
View web version