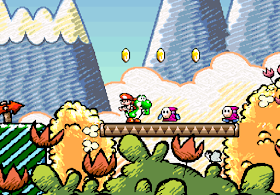 Genre: Action
Perspective: Side view
Visual: 2D scrolling
Gameplay: Platform
Art: Anime / Manga
Published by: Nintendo of America Inc.
Developed by: Nintendo Co.
Released: 1995
Platforms: Super Nintendo (SNES), Nintendo DS (NDS)
Yoshi's Island is one of the best-selling, as well as one of the most significant games on SNES. Despite its name, it is a prequel to the previous games Mario. Game graphics and gameplay are different from other Mario games - the player controls Yoshi's dinosaurs, and not Mario himself, who appears as a helpless baby.The visual design of the game imitates the style of the pencil drawing - it was an innovation for this franchise, the idea itself came from the producer of the game - Shigeru Miyamoto, who did not like the previously rendered 3D character models as sprites, popular at the time thanks to such projects as Donkey Kong Country. Yoshi's Island was released in Japan in August 1995, two months later the world premiere of the game took place. Some of its special effects were realized thanks to the use of the Super FX2 microchip. In 2002, the game was re-released for Game Boy Advance under the name Yoshi's Island: Super Mario Advance 3, which contained minor changes. Nintendo also released this version of the game on Nintendo 3DS and Wii U Virtual Console.Specialized press accepted Yoshi's Island enthusiastically - the game received general recognition and had an impressive financial success - it sold more than four million copies. Observers of the 1990s and 2000s unanimously recognized the game as a masterpiece and the best platformer of all time, noting highly its aesthetics, sound design, level design and gameplay. Thanks to this project, Yoshi gained fame as a "game character", in turn, this success emphasized the artistic and director talents of Miyamoto. The visual aesthetics of the game and the author's techniques of Yoshi's Island have become a reference point for a number of spin-offs and sequels, including Yoshi's Story. (1998), Yoshi's Island DS. (2006), Yoshi's New Island. (2014) and Yoshi's Woolly World. (2014). The next platformer for Mario in 2D (for home consoles) is New Super Mario Bros. - was released only 14 years later.

The game takes place on an island lost in the sea, known as Yoshi's Island, the birthplace of all Yoshi dinosaurs, while Mario and Luigi were still babies. On the dinosaur Yoshi, the baby Mario falls from the sky. He was lost by a stork, which was attacked by an evil sorceress - Kupa Kamek. In addition, the wizard kidnapped brother Mario - baby Luigi. Yoshi and his dinosaur friends decide to help little Mario to cross the island, save his brother and return to his parents, and Camek repairs them and strengthens with his magic the enemies they encounter.

Yoshi's Island is a side-scroller platformer. The player is invited to manage dinosaurs Yoshi. Mario in the game appears as a defenseless kid, sitting on the back of a dinosaur and unable to move independently (if he does not have a star).Yoshi can eat most of the enemies, turning them into colorful eggs that follow him on the heels and can be used as a throwing weapon. At some levels, Yoshi can transform - for example, turn into a helicopter to overcome air obstacles, or become a mole to overcome the underground obstacles. If one of the enemies strikes a dinosaur, the baby Mario takes off from his back and soars inside the soap bubble; The countdown starts, and if within a given time the player, controlling Yoshi, does not have time to catch Mario, then the servants of Kamek arrive and kidnap him, while Yoshi loses one life.The game consists of six game worlds, each of which in turn is divided into eight levels, which in total with bonus and hidden zones gives 55 unique game levels. When they pass, the player encounters 127 different kinds of enemies, about 40 of which were developed specifically for this game. At the end of each 4 th and 8 th level appears boss.At each level there are 20 hidden red coins, 5 flowers and 30 maximum accumulated seconds of the Mario timer (stars). If you collect all of them, then the level will be passed by 100%, and after in one of the worlds all eight levels are completely covered, an additional level opens. Thus, the game includes six secret levels (one in each world), which you can go through again and again in order to collect useful things and additional lives that you can win in the bonus game at the end of each level.
‹
›
Home
View web version