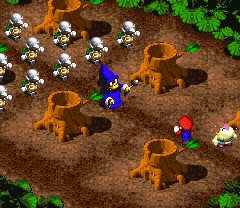 Genre: Action, Role-Playing (RPG)
Visual: Isometric
Art: Anime / Manga
Pacing: Turn-based
Published by: Nintendo of America Inc.
Developed by: Square Co.
Released: 1996
Platform: Super Nintendo (SNES)
When Nintendo took RPG featuring Mario, they involved the monsters of the genre - Square. That turned out great role-playing game SuperMario starring. The graphics in the game that almost 3D, pleasant music, easy control - all the ingredients for a quality gaming action there. Mario fights with enemies, gaining experience and learning special skills, use helpful tools and weapons, the help of friends. It recommended to all.The last game that uses the characters of the Mario series, released for SNES.

The adventure begins with Bowser's castle. After the success of saving Princess Peach on the planet, there was some phenomenon. The sword stuck directly into Bowser's castle, and 7 stars were transferred somewhere. Mario, unfortunately, was thrown back into the house, and Toad became aware of what happened at the time of the return. Mario decides to go to the Mushroom Kingdom and tell the King everything. But the prince of the cloud kingdom joins Mario, it is no accident that he is expelled. But he said that the family coin was stolen by a crocodile thief. And Mario returns it. But to return to the Mushroom Kingdom, he is already captured by a leader named Mask. And Mario successfully defeats him and takes 1 star. And he understands what kind of stars. This magic artifacts are able to do something useful, and something wrong has happened, this is a violation of the balance in 7 stars. A sword called Smitty there and chose one land and stayed there forever to live until now. And Mario decides that he "himself brewed this problem" and decides to find the rest.

Genno is a hero and a new character. Appeared not casually. He helps Mario on a journey and you can play for him in battles. At the end of the game, it returns to its original state and the world is restored. He was a doll and then became the last hope of the planet.
Rangers - 5 heroes and new enemies of Mario. The leader controls the ship. The pink ranger heals not only himself but his assistants. During the game, they kidnap the Red Star at the Barrel Volcano level (English Barrel Volcano). Mario overcomes everyone including the ship and takes the star. Destroyed Metal Sonic in the 6th episode created by the fans of Super Mario Bros Z. The red ranger (the same leader) decides to avenge the others, but he did not succeed and for which he paid with his own life (if they certainly have life).
Smitty is the boss of the game. The head of the factory for the creation of the army. In the game it turns out that he stole 7 stars and 6 scattered in different corners.
‹
›
Home
View web version