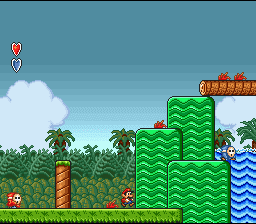 Genre: Action, Compilation
Perspective: Side view
Visual: 2D scrolling
Gameplay: Platform
Interface: Direct Control
Published by: Nintendo of America Inc.
Developed by: Nintendo Co.
Released: 1993
Platform: Super Nintendo (SNES)
All games in the series Super Mario (parts 1-3), plus The Lost Levels (The Lost Levels) are assembled in one game. It certainly stir the memories of those who played Mario many years ago. The game has improved graphics and sound, as well as the added function of saving (which is now not so important).
List of games
Super Mario All-Stars includes the four Mario titles originally released for the NES:

Super Mario Bros. and Super Mario Bros .: The Lost Levels share sprites, sound effects and other attributes that were not the same in the original NES versions (such as mushrooms, backgrounds or soil). Also, Luigi is taller and slimmer than Mario. The endings of both games are now exactly the same as each other, but a bit different than they were in their respective original versions. Both titles also share the scoring system: the player now earns 50 points for each unit of time remaining on the clock after the last level of each world. Unlike the original version, the player also gets a bonus for the time remaining on the clock after the final castle of each world. Finally, they also share three new sound themes that are used, one in the bonus / sky phases, one in the Bowser clashes and the third in the Bowser match on the 8-4 and D4 worlds. The Lost Levels).
On the home screen of the original Japanese version reads Super Mario Bros. 2: For Super Players. This name originated from the legend that had a medal present in the box of the original version, which said for Super Players.
The Venomous Mushroom originally had blackheads; Now it is blue and has a skull and an angry face to identify it more easily. Super Mushrooms and 1UP Mushrooms are the same as their counterparts in Super Mario Bros. 3.
In the original version, when a player lost all their lives, had to start again from the beginning of the world, as it would in Super Mario Bros. In this version, the player can start again at the level where he lost, at Just as you save the game at the exact level at which you stop playing.The A-D Worlds are available directly upon completing level 8-4 (or after World 9) unlike the original, which to unlock these Worlds required completing the adventure eight consecutive times.

Perhaps it is the title that suffered the most radical graphic and audio changes of all, achieving a great improvement.
The introductions at each level have been colored and animated.
Slot machine of the bonus stage has been improved, making the cirsas bigger and adding a new figure, "7". In the old version, the player could only win up to five extra lives while in this he can win up to ten.
Formerly, when the player was left without lives, he could continue twice per game. In this version you can continue indefinitely thanks to saved games.
Previously, only one character per level could be used. In this version, you can change characters when you lose a life.

The changes in this game were few. In the audivisual section, in addition to the graphic improvements like the other deliveries, Mario and Luigi no longer share the same sprite by changing the color and three new themes have been added: one for the title screen, another on Peach's cards at the end Each world and the last one when catching the third card of the goal of a level (if three equal are not taken). In gameplay, changes are void in main mode, but battle mode has been added as individual mode selectable from the main menu.
‹
›
Home
View web version