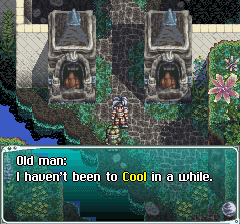 Genre: Action, Role-Playing (RPG)
Perspective: Top-down
Visual: Isometric
Art: Anime / Manga
Setting: Fantasy, Sci-Fi / Futuristic
Published by: Enix Corporation
Developed by: tri-Ace Inc.
Released: 1996
Platform: Super Nintendo (SNES)
The game is set in 2432, the year. In the role of the main character stands a guy named Ratix Farrence and his girlfriend Milly Kiliet, who live on the planet Roak. Ratiks, dreaming of "something not ordinary", get it in the form of an attack on his village. As it turns out soon, in a town nearby Cool rapidly develops a terrible illness: petrification. Compounding the situation is also the fact that Milly's father is infected. In trying to save him from the fate of other guys meet Iria Silvestoli and Ronixis J. Kenny -. Earthlings who, as it turns out, are also interested in the details of the incident with the virus. Soon, the player learns that the planet is already saved and can not, in order to prevent the total fossilization of its inhabitants, the characters are sent to the past. The second half of the game once again takes us to the futuristic landscape.
As I said, graphically - this is the most beautiful JRPG on the SNES, which is squeezed from the console all, what it can do. The main difficulty for today's gamer is that conventional emulator will not be enough to play it. Rum requires cunning decompressor SDD-1, which is available only on SNES9x (can also be patched by programmok rum, pozaimstvovovannyh on www.dejap.com). But the effort is worth it.
Star Ocean includes a fairly high-quality videos, which sometimes are accompanied by the voice acting. Before our eyes appears a typical 2D world, like any other 16-bit JRPG. But this world is far more detailed than usually draws our imagination at the mention SNES system. In the status-screen characters we see cute anime portretik each of them, that pleases.
Surprisingly, the game has Surround sound mode that, given the native platform, quite impressive. Right there is a player in the start menu, so that we are able to listen to music from the game, which are not so primitive to doubt the necessity of features.
The combat system is very similar to the one used in the games of the series "Tales of ...". Battles take place in real time, with the ability to switch to any character, even though the primary is Ratiks. For the rest, there is a set of characters plants, which limits or determines their actions in combat. It directs them artificial intelligence, which can not help but comment, very, very weak. Conclusion - the main striking force is always Ratiks.
To move in the battle can be specified by the cursor destination, a pop-up when you press the "Y" button. And it is very uncomfortable, because as long as you specify where to move the hero, monsters do not differ a special tact, waiting for the player's turn. You can use the Techs, who are set to shift.
tier system development, with a small but: Skills. A player has the ability to sing, draw, cook, write music, books, forge weapons and even become a jeweler. For each level gained a character gains a certain amount of SP (Skill Points), which he can spend on learning skills. Usually, learn some specific skills, the character learns the appropriate ability (Ability). For example, Cooking consists of three skills: Kitchen Knife, Recipe, and Good Eye.
Each character has specific talents that he may be useful in specific crafts and skills. For example, the Sixth Sense talent will be useful for the Scout ability, which is responsible for the number of Encounter'ov. With the above capability, the player can decide for himself, hunt monsters, or running away from them.
The plot is in a non-linear game. Its development depends on the composition of your party and that is much more interesting from a personal relationship between each of the characters. These relationships depend on your actions in the Private Action. In front of each city you will be able, by pressing "Y" button to stroll through the city. Something like Bravesoul with stops at hotels. Resource GameFAQs suggests that Star Ocean has at least sixty endings. Although quite doubtful that the majority of them varies considerably.
The game has a lot of secrets and sub-quests: Ougi, collection, arena, and many more are waiting for gamers, who decided to plunge into the study of the first part of the role-playing series from the studio Tri-Ace, who was able to prove that not only is alive Enix Dragon Quest'om. The game is fully capable to meet the competition of the whales as Chrono Trigger, Final Fantasy VI, Shin Megami Tensei and Yu-Gi-Oh!
We can only ekstraktirovat all of the above. Graphically, the game has surpassed all of the above; music is still weaker than the FF, but it attracts the convenience of listening to Sound Player'e. The plot is rather unusual. world system resembles Star Trek, but it has its own unique features. Multiple endings contribute to repeated passage of the game. We can say that it was the legendary Star Ocean'om ends the era of Japanese role-playing games on the Super Nintendo, well and continue the game on PSX and PS2 also came not very successful.
‹
›
Home
View web version