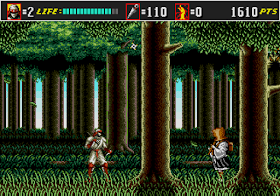 Genre: Action
Perspective: Side view
Visual: 2D scrolling
Gameplay: Platform
Published by: SEGA of America
Developed by: Megasoft
Released: 1993
Platform: SEGA Genesis / Mega Drive
Neo Zeed again threatening the world. The evil crime syndicate - believed everything was defeated two years earlier - has returned, which is headed by somebody like Shadow Master («Shadow Master"), Joe Musashi felt their presence, and went down to the lonely mountain peaks in Japan, to his arch-nemesis again - face to face. He - Shinobi - stronger than steel and faster than a whirlwind, the last guardian forces Oboro nindzitsu. And only he can stop Neo Zeed.

Compared with its predecessor, the action in Shinobi III is much more smoothly, with less emphasis on difficulty and speed. Also, new character abilities, such otprygivanie from the walls, the ability to produce just 8 shuriken jump was also enhanced the effect of Ninjitsu. Added some other possibilities passage of such jumps on a horse or riding a surfboard.
The game has 4 levels of difficulty, and they differ not only in gameplay (the complexity of the battle with the boss enemy movement, damage and so on), but the number of lives (EASY mode only player gets nine lives, whereas in the rest of 2) and the amount of health (mode EXPERT health bar is the smallest, with small hearts are almost completely restore her almost). The complexity of the game is set in the settings, you can also put the number of the standard weapons shuriken (0 to 70).

In the Options menu, change the value of the "Sound Effects" (SE) for "Shurikin" (sic). Then slide up on the option "Shurikins" and change its value to "00". Wait a few seconds - and zeros changed to infinity symbol.

On the title screen, select Options and highlight the option "Music". Select a melody called "He Runs" and press B, to listen to her; then just Lose "Japonesque", "Shinobi Walk", "Sakura" and "Getufu". If you did everything correctly, the last time you press B hear a brief melody; it is a signal that the code is entered immortality. Now start the game and you no harm.
‹
›
Home
View web version