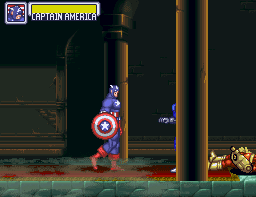 Genre: Action
Perspective: Side view
Gameplay: Beat 'em up / Brawler, Fighting, Platform
Setting: Sci-Fi / Futuristic
Published by: Capcom Co.
Developed by: Capcom Co.
Released: 1996
Platform: Super Nintendo (SNES)
Great action on the superheroes of the universe of the company Marvel. The game features the five most famous characters, each with their own characteristics and skills. The Spider-Man is using the web, Captain America is actively using the shield-boomerang, the Hulk is mercilessly waving his fists, Iron Man is showing his super suit superstyle, Wolverine has generally migrated to the game from X-Men - Mutant Apocalypse on the same console without any changes in the Strikes and skills, claws as always in business. For those who can fly, climb walls, etc., at some locations, forks and secrets are provided. But all the same meetings with the crafty boss at the end of the mission can not be avoided. The plot revolves around a certain Adam Warlock, who called upon the most naive heroes to gather six stones, possessing unknown power and different abilities, which can do a lot of evil in evil hands. After the passage of the mission we get such a pebble and can also use it, which is nice. As they say, the extra power will not interfere in our not easy way. Also in the game there is another inventory. In general, Capcom created quite a decent game with good graphics and music for the heroes in the world. Who is their fan is strongly recommended, and indeed all fans of good fighters.
‹
›
Home
View web version