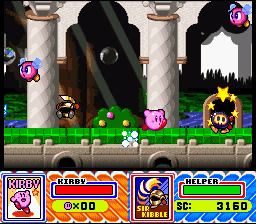 Genre: Action
Perspective: Side view
Visual: 2D scrolling
Gameplay: Platform
Setting: Fantasy
Published by: Nintendo of America Inc.
Developed by: HAL Laboratory
Released: 1996
Platform: Super Nintendo (SNES)
Walk with Bun Kirby. Its capabilities are known - he is able to inflate and fly, run fast, spitting enemies who swallow (this is true heroic ability). Good graphics and sound. Funny and serious enemy bosses will interfere with Kirby, but it's not for nothing.

In the Kirby Super Star, players take on the role of Kirby, who can swim through the air, inhale blocks and use them to fight enemies. When swallowing certain enemies, Kirby can copy their abilities and use them as their own from a wide range of attacks. A unique feature of the game is the addition of assistants. When Kirby has the ability at his disposal, he can turn it into an auxiliary character that can be controlled by both the second player and the computer (you can not create an assistant from the abilities of "Crash" and "Microphone". A hero can use an assistant in a certain form or turn it back into an ability to help himself. Some assistants, such as "Wheelie" allow Kirby to interact with him as one player. If the assistant has too much damage, then Kirby must give him a new ability before he disappears. If the protagonist gets too much damage - he loses his life.
The game process goes through seven main processes and several sub-games:
Spring Breeze - a simplified remake of the game Kirby's Dream Land with the improved gameplay of Kirby Super Star. Kirby must get to the castle to challenge the King of Dedede, who stole food from the inhabitants of the Land of Dreams. Unlike the original, the locations of the "Float Islands" and "Castle Lololo" merged, and in the Dedede Castle, the protagonist does not have to fight the bosses that appeared before Dedede.
Dyna Blade is a mini-game in which Kirby must stop Dine Blade, a giant bird that destroys grain fields in the Land of Dreams. The mode consists of 4 levels, which the player must pass to meet face to face with Dinah Blade. There are also two secret levels and a mini-boss that moves around the world map.
Gourmet Race is the type of race in which Kirby competes with King Dedede at the speed of eating food (Kirby wins if he eats more than Dedede). Races pass through three levels of different lengths, the winner is the one who at the end of the race will score more points (bonus points are awarded to the player who first came to the finish line). Players can choose two modes - competition with the king of Dedede or competition with a shadow (the best result), in order to improve the result. The version on DS has a multi-user mode.
The Great Cave Offensive is an adventure mode in which Kirby studies a cave in search of treasure. The treasures are in 60 chests scattered over four zones, if you collect 60 treasures, the total score will be 9999990. Some of the treasures are references to other Nintendo games, such as Tryfors, Screw Attack, Captain Falcon's helmet and Mr. Saturn.
Revenge of Meta Knight is a game in which Kirby tries to destroy the Meta Knight warship - The Halberd (Russian Halberd) before Meta Knight destroys the Land of Dreams. Each area has a time limit, which can cost Kirby a life if it reaches zero. A feature of the mini-game is dialogue from the crew members, sometimes shown in the game. Every time a player passes the round, either the ship gets damaged, or Kirby tries to get back to "Halberd". At the bottom of the screen is a counter showing what is being done on the ship. Bosses are Twin Woods, two Whispy Woods and Heavy Lobster, and robotic machines similar to lobsters.
Milky Way Wishes - the longest game in the collection. When the Sun and the Moon fight around the planet Pop Star, a creature named Marx tells Kirby that he must travel 9 planets to restore the giant comet "Nova", which can fulfill any desire. Unlike other modes, the protagonist can not use the abilities of the enemies he swallowed, instead he uses the abilities of the Deluxe Copy Ability Pedestals. These are the elements of the abilities at Kirby's disposal that the player can choose. The game also has a mode for scrolling locations from start to finish.
The Arena is a mini-game for endurance testing, in which the player is challenged by bosses, starting with Waddle Dee. The player does not have additional lives. The game has 26 bosses in 19 rounds. In between the rounds there is a room with "Maximum Tomatoes", which you can eat only once and two randomly selected pedestals with abilities (you can choose it at the beginning of the game).

In both modes it is possible to play against both the computer and two players.
Samurai Kirby is a mini-game similar to the mini-game "Quick Draw" in Kirby's Adventure, in which the player must at the appropriate moment (not too early and not too late) - by the sound signal to attack the opponent.
Megaton Punch - a mini-game in which players, pressing at the right moment, the buttons should break through the crack in the planet. The bottom line is to make the crack longer than the opponent's.
‹
›
Home
View web version