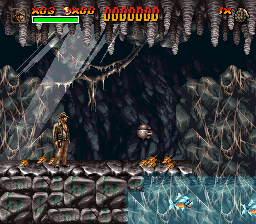 Genre: Action
Perspective: Behind view, Side view
Visual: 2D scrolling
Gameplay: Arcade, Platform
Published by: JVC Musical Industries
Developed by: Factor 5 GmbH
Released: 1994
Platform: Super Nintendo (SNES)
The game is an adaptation of the trilogy about the adventures of Indiana Jones - the films "Indiana Jones: In Search of the Lost Ark" (1981), "Indiana Jones and the Temple of Doom" (1984) and "Indiana Jones and the Last Crusade" (1989). The developer was "Factor 5" company, publisher - "JVC Musical Industries, Inc". Game levels are interconnected with inserts with texts retelling movie events. The release was timed to coincide with the release of the game Super Star Wars: Return of the Jedi, also developed by JVC and LucasArts in the same style as the Super Star Wars trilogy.

The player controls Indie on levels based on movie events. The main way to attack is to use a whip, in addition, Indy can jump on enemies and roll up to them, knocking them off their feet. Sometimes a player can find a weapon with an unlimited number of cartridges, sometimes a player finds grenades. Also, the whip can be used as a handy means for jumping over the abyss. Also the game is diluted with other types of gameplay, such as aircraft management, trolley and raft management, when descending the mountain river. The game is divided into 28 levels and the gameplay is similar to the trilogy Super Star Wars.
According to surveys, the most difficult levels are levels in the handling of a raft and trolley in scenes from the second film. Also a skirmish on an airship from the third film, when a player must avoid traps and enemies. If the player does not pass the stage, then he is forced to start the entire level first. Also on some levels, if you lose all your lives, the player also starts the level first.
‹
›
Home
View web version