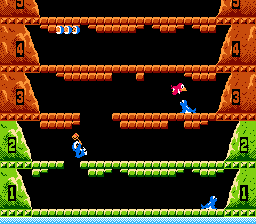 Genre: Action
Perspective: Side view
Gameplay: Arcade, Platform
Published by: Nintendo of America Inc.
Developed by: Nintendo Co.
Released: 1985
Platform: Nintendo (NES)
According to the story, the drop in the user guide, two Eskimo, Popo, and Nana, pursued through 32 game levels condor stole their vegetables.The player controlling the armed mallet Eskimo, should pave the way to the top, punching holes in the icy bar. Upstairs they will catch most of the condor. In this he was hindered by various opponents: fur seal Topi, Nitpicker crows and polar bears Polar Bear. Each of them operates in a special way. Topi may eventually plug the holes punched a player, Nitpicker can freely fly over the crossbar, and the Polar Bear, if a player hesitates too long, jump on the spot makes the game screen move up. Reaching the top of the mountain, the player can collect the stolen vegetables (usually eggplant). At the top of the player to catch a thief, a condor.As you progress through the ice blocks instead of the usual ice appear, as well as vertical walls and a horizontally moving platform. Speed ​​opponents at the same time begins to increase.The game also provided the NSA with two players, with how they can compete with each other and work together to pass the levels.