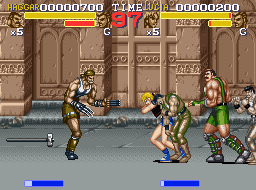 Genre: Action
Perspective: Side view
Visual: 2D scrolling
Gameplay: Beat 'em up / Brawler
Art: Anime / Manga
Published by: Capcom Entertainment
Developed by: Capcom Co.
Released: 1996
Platforms: Super Nintendo (SNES), Nintendo (NES)
One of the best Beat-Em-Up on SNES. High quality, which was achieved only in the third part of the series. And that here only is not realized. Four characters to choose from, each has a solid set of combinations: both in place, and in running, and in jumping. Everyone can pick up a weapon that he owns perfectly: for Haggar, this is a pipe cut, for Guy - nunchuck, etc. There are calls behind the back, so you can break vertebrae, knock down and kill or make a death roll in the air and much more. In general, everything that needs to be implemented for high-quality Beat-Em-Up. But that is not all. In the game for the first time for Beat-Em-Up, a string of aggression was realized. When you destroy enemies, it slowly but surely fills, and when it comes to the end, it can be activated. Thanks to her, the characters make spectacular, simply deadly combinations of punches, leaving no chance for the survivors of the hot-handed enemies. In the game there is also freedom of movement, which does not particularly affect the plot, but it is also pleasant to pass the game in different ways. The game may well compete with the quality of such Beat-Em-Ups on Snes as Ghost Chaser Densei, Rushing Beat Shura, Sonic BlastMan 2 or many others.
‹
›
Home
View web version