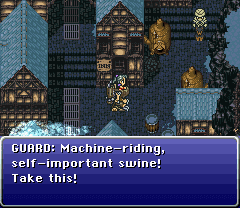 Genre: Role-Playing (RPG)
Perspective: Bird's-eye view
Visual: 2D scrolling
Gameplay: Japanese-style RPG (JRPG)
Art: Anime / Manga
Pacing: Real-Time, Turn-based
Interface: Direct Control, Menu Structures
Setting: Fantasy, Sci-Fi / Futuristic
Published by: Square Soft
Developed by: Square Co.
Released: 1994
Platforms: Super Nintendo (SNES), Game Boy Advance (GBA)
Awesome part of the epic Final Fantasy, which remains one of the best to this day. What do players find in it? Many see great balanced gameplay with great attention to detail and small elements. Others find an exciting story. Some just see a nice game. But it requires much more in-depth analysis. This part goes beyond the traditional boundaries of games, enveloping the state of total immersion and emotional experience, which makes it one of the works that can touch the deepest feelings. Each character personifies his past, his history, his fate, and there are about ten of them, not including secondary ones. One can observe their dreams, their struggle with their nature, each time changing and overwhelming their feelings and unpredictable emotions. For the very same negative character Kefka does not need reasons to kill. And he does not need a reason to commit any crime. The development of the plot is very subtle. According to graphical indicators, this is the best part of Final Fantasy. The character sprites are large enough to see a good range of emotions in them. That there is only a scene in the Opera House, which gives simply an unthinkable effect of sensitivity. The perfect soundtrack perfectly highlights every moment of the game, every episode of the hero's experiences, and their endless wanderings through the vast expanses of the world, which is gripped by a terrible war. Music Nobuo Uemetsu is incomparably beautiful in this game! Each character has its own composition. Excellent balance of magic, a variety of combat and special skills, as well as a wide range of strikes. The combat system has been worked out and implemented to the smallest detail. Each character has its strengths and weaknesses. This is not a simple game, it touches the heart and mind of the player. It makes you think about the story, about the plot, about the characters even when the game ends and makes you want to play it again, providing some of the most beautiful scenes in the history of the RPG. They immerse us, make us feel as if we are there. Is this a game that shows us that video games can be part of "high art" !? Certainly!
‹
›
Home
View web version