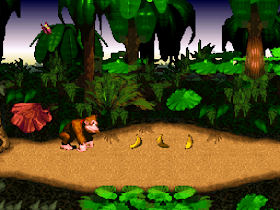 Genre: Action
Perspective: Side view
Visual: 2D scrolling
Gameplay: Platform
Published by: Nintendo of America Inc.
Developed by: Rare
Released: 1994
Platforms: Super Nintendo (SNES), Game Boy Color (GBC)
Donkey Kong Country is a platformer where the main goal to reach the exit in each of the many stages (levels) in the game, but on the way there are a variety of enemies, traps and other obstacles that make the variety in the gameplay. The game takes place on a large island, bearing the name "Donkey Kong Island".All in the game 6 major locations, which I call "the city." In each city on 5-6 stages, some are unique at all stages, especially the third and fourth night or underwater jungle into a tropical storm ... complete each of the cities of the boss area. After six cities have a boss immediately to fight the last boss? King K. Rool.The game is always a side view, but amazing animation transforms the world of interactive objects DKC and takes the game beyond the standard 2D.Heroes can walk or run, accelerating the movement in the territory, jump and hang on clothesline. Pick up the barrel and attack their enemies.
Destroy the monsters and other possible ways: either a monkey can do a somersault forward, thus knocking down the enemy, after which he usually falls off the screen and the line of sight. Jump on the enemy as possible, but there are opponents who are immune to that type of attack: the bees (Zinger) and crocodiles-athletes (Krusha), the more the athlete in a purple shirt.The game has a system of life, when the monkey touches the enemy without a roll or the enemy is able to ignore the flip-flop, this monkey is hit and runs automatically, provided that at the moment player two monkeys in pairs. After that, the second monkey takes the initiative, but if it takes damage, then take the life, and you have to start first stage, or at the place where the barrel was broken with the Stars (checkpoint). Nevertheless, both the hero when they go together, always can be swapped, and the second monkey is now dominated. The same, which is a little behind, completely invulnerable, and even can not fall into the abyss. However, change places with her is carefully if inactive monkeys are right on a trap like burning oil barrels, or "inside" the monster, it instantly takes damage and run as soon as the player will change monkeys ...The game can go fairly quickly, since the main goal is simply to find a way, and usually always obvious where to go on. But there is a percentage that determines how many secrets and bonuses found a player in the process of passing the DKC. Almost every stage has from one to three bonuses, and each of them adds 1-2% to the overall index passing game. Passed 100% game shows the value 101%, and instead of the symbol "%" after the number "101" is the icon "*" (asterisk). Only those who are able to pass on the DKC 101%, can call himself a master of this game.
‹
›
Home
View web version