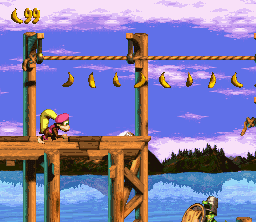 Genre: Action
Perspective: Side view
Visual: 2D scrolling
Gameplay: Platform
Published by: Nintendo of America Inc.
Developed by: Rare
Released: 1996
Platform: Super Nintendo (SNES)
Donkey Kong and his pal Diddy Kong were captured horrific Baron K. Roolenstein. Their girlfriend Dixie Kong and her cousin Kiddy hit the road in order to save his friends. To do this, they need to overcome a lot of Cremlingen, overcome all sorts of enemies, to do battle with the robot Baron K.Rulenshteyna Kaos and finally come face to face with himself Baron K.Rulenshteynom. And only if they are able to overcome all these obstacles and dangers, their friends Donkey and Diddy will be free.

Gameplay, for the most part, remained unchanged from the second part of Diddy's Kong Quest. bonus coins, which will be needed in the future should be collected again to get to the Lost World. Also in each level can be found coins DK. However, unlike DKC2, in DKC3 Coins DK is not enough just to find them protects one of kremlinkov and need to figure out how to beat him, to get a coin. This change complicates the collection of coins DK. It is also possible to drag a friend on the back in stock. However, there are differences on a shot of a character. Dixie flying much higher and further when throwing, Kiddie, on the contrary, flying close, but their weight can break through cracks in the floor. The innovation is DKC3 Banana Bird. They are scattered around the world and they should be free, and get everyone together. Some people can be freed from the clutches of the Brothers bears through the exchange of various trinkets, but the majority concluded in crystals. In the caves, where the crystals, plays the combinations of colors, which must be repeated using the gamepad. If correctly repeat the color combination, the banana bird will be released. Freed birds will find a temporary home in Vrinkli Kong. When all the bosses are defeated, Baron K.Rulenshteyn suffer a crushing defeat, all the bonus coins and coin DK will be found and released all the banana birds and uncover the secret of a lost world, it will score the maximum 103% of the game. By using a special code when downloading a new game difficulty level can be increased. This is reflected by the fact that at a higher level of difficulty in the game will not be kegs DK, where you can find a partner, you are lost in the passing game.

The Kongs who supported you in past deliveries return, albeit with different trades and activities:
Cranky Kong - it only appears in the Swanky Kong mini-game. Cranky competes against you, if you beat him you will win coins and bananas. Unlike Donkey Kong Country and Donkey Kong Country 2: Diddy's Kong Quest, he no longer gives advice to the Kongs.
Wrinkly Kong is now in caves where the player can save his progress. It is also where all the Banana-Birds you collect are taken care of. In Game Boy Advance is a place of meditation.
Funky Kong - controls your workshop where you can rent your boat, when you deliver a patch will give you a Hovercraft after you deliver two Ski Table will give you a Jet Ski, and if you collect all the DK Coins will give you a Helicopter. Funky Kong is the one who suggested that Dixie Kong take care of his cousin Kiddy Kong and take it with you at the beginning of the game.
Swanky Kong - host your minigame in which you earn coins, lives and bananas. Instead of working in a TV studio now works at a fair.
Animals friends

Ellie New in the series. She can, with her trunk, absorb Barrels and at some levels, suck water to shoot her, can not approach if there is a Sneek (rat) nearby.
Parry New in the series. It is a small bird that is placed above the Kongs, allowing to obtain bananas, normal currencies and DK Coins that can not be obtained with a normal jump nor when you launch the other Kong.

Bazaar: It has a shop on the main map near Wrinkly Kong and Funky Kong rentals. He has the shell that needs Barnacle, the mirror that asks for Barter and the chocolates that has to get Balchelor (Only in Game Boy Advance).
Barnacle: Located in Lake Orangatanga. He wants to complete his collection of shells. In the version of Game Boy Advance was moved to Pacifica.
Brash: Located in Kremwood Forest. It is the one who has the record of being the fastest to cross the second level of this world (1min: 15sec) until it is won by the Kongs. Brash gets so angry that he hits his inn, and with that he manages to move a log, through which the duo Kong can pass through a secret cave.
Blunder: Located near Lake Orangatanga and Kremwood Forest. It reveals by chance how to open the lost world.
Bazooka: Control a cannon in Mekanos.
Blue: Located in Valle de Algodón. He thinks another Brother Bear forgot his birthday.
Bramble: View a florist on the main map near Cotton Valley and Mekanos.
Blizzard: Located in K3. It's the only Bear to deliver a birthday present to Blue (but he needs Dixie and Kiddy to deliver it).
Benny and Björn: Operate chair lifts at Sharp Summit.
Barter: Owner of a hardware store on the main map near the Sharp Summit Ridge and K3.
Baffle: Located in Kaos Core. Specializes in solving puzzles.
Boomer: Works with explosives in Krematoa, the Lost World. When you have paid 15 Bonus Coins, clear paths to reach Krematoa levels.
Bachelor: In the Game Boy Advance version, it replaces the Barnacle Bear in Lake Orangatanga. He wants the Kongs to collect a rose and chocolates for his date.

Lake Orangatanga: It is the first world in the game. Lake Orangatanga has several levels of docks and mills. Also in a strange way we found a level of snow. The boss is Belcha, a large and aggressive barrel that spits barrels, which in its interior brings insects that when used as projectiles you will make this giant barrel swallow them and when repeating by this, fall with its force.
Kremwood Forest: A large forest with a river that crosses it, also consists of several gigantic trees among them one with a big mill. His boss is Arich, a giant spider that spits venom.
Mekanos: Small island full of waste, drainage pipes, and chemical factories, highly contaminated world. In the beta version, the island had been a forest full of trees (those that are in the process of being cut). Its boss is KAOS, a robot and the main villain of the game.
Cotton Valley: An aquatic world, located in the North Kremis, has several waterfalls that fall into a lake. The boss is Squirt, a monster resembling a snail behind a waterfall that tries to make you fall spitting water.
K3: Snowy mountain full of slopes, there we find a factory and a waterfall located to the left side of the factory. His boss is Bleak, a snowman who throws snowballs. The name is a parody to the 12th highest mountain in the world, K-3 (now known as Broad Peak).
Summit Sharpened: World with a mountain range full of rocks and caves, has two chair lifts (one to be repaired). The boss is Barbos, a giant sea urchin. In the version of Game Boy Advanc3, Barbos who is moved to Pacific is replaced by Kroctopus the Kraken.
Peaceful: A new world, which is only found in the Game Boy Advance version of Donkey Kong Country 3: Dixie Kong's Double Trouble, is a large water area with a waterfall and a forest. The boss is Barbos, the original boss of Razor Ridge.
Kernel Kaos: Final area, although if you take into account all levels this world is the penultimate, this is where we find the castle KAOS. There are levels with lightning and poisonous water (which in one level reverses the controls). The boss is KAOS, and its inventor Baron K. Roolenstein. After you beat the boss you will see the first end of the game. This is the seventh original level of the version of Super Nintendo Entertainment System.
Krematoa: Similar to the Lost World of Donkey Kong Country 2: Diddy's Kong Quest, as well as in that they are secret areas and as the Kongs must pay with Bonus Coins to enter the levels. To access this lost world you must turn counterclockwise to the 4 stones that are to the right of Mekanos. Krematoa may once have been an island with an active volcano that sank into the ocean. It is full of rocks and caves, it has a petrified forest. The name is a reference to Krakatoa, a volcano located in Sunda Strait. Boomer the Bear, the Brother Bear of Krematoa, specializes in explosives, it is who must pay him with 15 Bonus coins per explosion. The music of Krematoa is little different from those of the other worlds. When defeating the final boss of the game (which is Baron K. Roolenstein), you will see the true end of the game, but for this you need to get all the banana birds, besides having all the DK Coins.
‹
›
Home
View web version