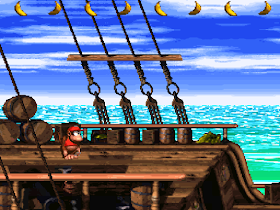 Genre: Action
Perspective: Side view
Visual: 2D scrolling
Gameplay: Platform
Published by: Nintendo of America Inc.
Developed by: Rare
Released: 1995
Platform: Super Nintendo (SNES)
King Ruhl now imagines himself a pirate, assuming the title of "Captain". As in the best (or worst) pirate traditions, they kidnap Donkey Kong and keep him in their lair on the line "Crocodile" in order to obtain ransom. Diddy Kong and his friend Dixie go to the island to save their unlucky friend.

As before, you can play alone, alone in a team or two together against each other. The player goes on level, battling with enemies, collecting bonuses and finding hidden bonus levels.
Now the heroes can jump on each other to make team shots. They are needed to climb on inaccessible heights or "kill" enemies that can not be "killed" alone.
Bonus levels are significantly changed. Now the player must get the Kremkoin coin for the allotted time. To do this, you must either collect all the stars, or destroy all enemies, or simply reach the finish line of the bonus level. In total there are 75 bonus levels in the game.
At each level there is one hard-to-find Hero of the Game icon. At the end of the game, Cranky Kong checks how many the player found (only in the GBA version).

Gangplank Galleon is a pirate ship. The boss is the giant vulture Crow.
Crocodile Cauldron - volcano. Boss is the demon sword Cleaver.
Krem Quay - the swamp. Boss is a powerful crocodile Cagel.
Krazy Kremland is an amusement park on the outside of which an os colony has been built. The boss is a giant wasp King of SING.
Gloomy Gulch - an eerie forest, where there are ghosts. The boss is the ghost of Crow killed.
K. Rool's Keep is a castle. The boss is the dragon Kerosen (only in the version for GBA).
The Flying Krock is the flying base of Captain K. Roel. Boss - Captain K. Rul.
The Lost World - The Lost World, five entrances to which protects the Club. The passage costs 15 Cream coins. Having gone through all five levels of the Lost World, the player will have the opportunity to fight with K. Ruhl again.

Diddy Kong is the main character. Very fast.
Dixie Kong is Diddy's war girlfriend. Huge benefit in their adventure, they bring her hair, woven into the tail, which she can use as a "propeller" and fly through the air for long distances.
Cranky Kong - gives clues how to find bonus levels and Heroes' Badges of Video Games.
Vrinkly Kong - gives advice on game mechanics. Also it can save the game.
Swanky Kong is the leading quiz in which you need to answer questions. Prizes in quizzes are additional lives.
Candy Kong is assistant to Swanky Kong. Is present only in the version for GBA.
Funky Kong - can provide heroes with their aircraft, so that they can fly to any part of the island, which has already been visited.
Tiny Kong, the youngest sister of Dixie from the game Donkey Kong 64 (present only in the version for GBA), she and her clones are being rescued hostages in missions on the helicopter.
Donkey Kong is the protagonist of the first movement, kidnapped by Captain K. Ruhl.

Rambi is a rhinoceros. Can kill almost any enemy. It is capable of punching unstable walls with a run.
Engward is a swordfish. Allows you to swim quickly, and also to fight with underwater enemies.
Squox is a parrot. Can fly and throw eggs at enemies.
Spiderman is a spider. It shoots at enemies with cobwebs, and also with its help it can climb to great heights and overcome wide chasms.
Rattli is a snake. He jumps very high.
Glimmer is a fish-angler. Illuminates the path under the water at the level of the Galleon Glimmer.
Clapper is a fur seal. It occurs twice. Can cool the water.
Expresso - ostrich from the first part. Is present only in the version for GBA. Participates in ostrich racing, for the victories in which Krenky gives the Heroes' Badges of Video Games.

Neek is a gray rat. Occurs on ships and wherever there is something to profit. It differs in that it moves its jaws non-stop.
Click-Clack - beetle. Extremely vile and insidious type. Cleverly simulates the dumping of hoofs, turning over on his back, which, however, does not prevent you from hurling them into the enemy standing next door.
Spiny is a porcupine. Decent muck. It is very wise and does not allow you to sit on your head (literally), but is not ready for the fast rolls of Diddy.
Cat o '9 tails is a cat with 9 tails. Shizanuty small, probably, peretancevshy at the disco master. When you appear, it starts to spin hard. The result - you (along with him) are falling into the lava or some other kind of muck.
Flitter - dragonfly. Exceptionally rare specimen of the African mad dragonfly. Flitter is not dangerous and can be even useful if you use it as a step between platforms.
Mini-Necky is a vulture.
Zinger - wasp. Persistent, like her cousin, the famous sewing machine. However, after the victory of the monkeys in DKC1, he is still and afraid of the blows of the main friend Rambi, etc. But do not even try to destroy the red Singer - it's more expensive.
Screech is a parrot. Flies to the end of the level of Screech's Sprint race against Squawks.

Flotsam - stingray. Inhabitant of the sea depths. Hardly noticeable, it beats an electric shock - usually on the head.
Shur is a starfish. The most dangerous of the underwater inhabitants. When you appear, begins to spin the wheel, indicating a passionate desire to eat you with giblets. Moves usually along the diagonal
Puftup - puffer. Fish with a pump, which periodically swells from the size of the herring to the Belazovo wheel. Some of these enemies scatter at the time of death on sharp pieces that can cost you life.
Lockjaw is an ordinary piranha. An unfriendly and very agile inhabitant of the ocean. He loves everything meat and wool.
Snapjaw is an invulnerable piranha.

Klomp is a crocodile with a wooden leg. He walks with a waddle, but quickly enough.
Klinger is a sentinel crocodile. She likes hot drinks, that's why she only meets with a pillar or, as a last resort, with a rope. Moves only vertically.
Kaboing is an old warrior. Hobbling on freshly cut maple feet. It can always be recognized by a characteristic rumble.
Klampon is a crocodile with a big mouth. Spotted spots as a child. Possessing a very small torso and just nemerenyh jaws, which also protect him from your somersaults.
Klobber - a crocodile, runs in a barrel, because his clothes have long lost in gambling, and relentlessly suggests to figure out for three. Sometimes he throws out false bananas, which the central bank does not recommend to collect. From a strong blow to the head immediately climbs into the barrel, after which it can be moved from place to place and used as a tool. Green Clobbers just push the hero back, yellow ones knock out bananas from him, gray ones - lives, red Clobbers run up and explode.
Krook is a crocodile with throwing hooks. Very lazy, a goo and therefore uses his hooks as boomerangs to destroy the enemy, that is you.
Kutlass is a crocodile with sabers. It is distinguished by its small height and two chapaev's checkers, which it hardly raises. Despite this, one of the most insidious opponents. Unbreakable for strikes.
Kloak is a ghost in a raincoat throwing various items.
Kannon is a crocodile with a gun. Local Voroshilov shooter. Lupit kernels that refute all the laws of gravity. Has an unlimited supply of ammunition.
Kruncha is a boatswain, and that says it all. When approaching, immediately starts to whistle all up, from which it turns red. The Ministry of Health warns: in moments of rage can kill more than a dozen monkeys.
Klank - meets on a roller coaster.
Kackle is a ghost trying to grab heroes at the level of Haunted Hall. Looks like Carlson and Terminator at the same time. Semi-transparent, collisions with him are not dangerous. But in the stages with a timer, you can easily take your soul out of you.
Clubba is an absolute authority. Clever and avid. At work is ruthless but at the rest of the time you can negotiate with him. It protects the bridge leading to the Lost World. If you pay him a fee of 15 coins (kremkoins), he will allow you to cross his bridge.

Crow is a giant vulture. Drops eggs from his nest, can attack from a shaving flight. To defeat Crow, you need to use the huge eggs that fall from the nest and claws of Crow.
Cleaver is the devil's sword. He is able to shoot with fireballs and strike with a point. To defeat him, you need to use a steel cannonball.
Kagel is a gray Klubba clone. To defeat him, you need to use the explosive barrels that appear with every thunder of Kangel.
King Zing is a giant wasp. To enter into battle with King Zing and defeat him, you need to turn into Svoksa. After applying two strikes, temporarily acquires a red color and starts to shoot stings in all directions. After causing the maximum damage, it breaks up into five small wasps, which must be destroyed.
The ghost of Crow is the spirit of Crowe, who returned from that light, killed in the first zone. To defeat the ghost of Crow, you need to repel the attack of giraffe-vultures and kill the live vulture, then pick up the appeared barrel and throw it into Crow's ghost, and then climb up, deviating from the huge eggs and repeat the executed combat scheme.
Kerosen (exclusive to GBA) is a red dragon with two diabolical swords and a fiery breath.
Captain K. Ruhl - the final boss, the leader of the gang of Kremlings, the kidnapper Donkey Kong.
‹
›
Home
View web version