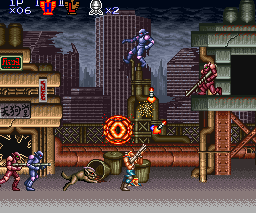 Genre: Action
Perspective: Side view, Top-down
Gameplay: Shooter
Setting: Sci-Fi / Futuristic
Published by: Konami
Developed by: Konami Co.
Released: 1992
Platforms: Super Nintendo (SNES), Game Boy
This version is a direct continuation of the first two games that appeared on the NES console. A new chapter of the confrontation of a highly skilled and militant squad of mercenaries, the last hope of the Earth, against a massive alien invasion. Excellent atmospheric, quiet muffled sound, concealing the threat and destruction of the population of most of the planet, as well as the hostile creatures and alien technologies that dominate in these areas, give birth to a truly worthwhile hit. It is exactly two years later that the sequel on the Sega Genesis will appear in the form of Contra Hard Corps. During this long period of time, Konami developers will add many distinctive features with the ability to choose a character, a variety of weapons during the game, and Contra III - The Alien Wars will present almost half of its capabilities.
Without this part, there would not be a legendary, beloved part for Genesis, or it would not have turned out to be such a pinnacle of perfection. What is the top deserve Contra III - The Alien Wars? I'll say that the great ancestor of Contra Hard Corps deserves no less than the status of a hit and equal marks in relation to his offspring at Sega. A truly great hit, featuring more advanced complexity.In Japan, this game was known as Contra Spirits.There are differences in the English and Japanese versions. To see a good ending in Contra III - The Alien Wars, you need to go through the game at the highest difficulty. It was noted above that this part is more complicated than the other versions, add even more complexity here, you will get a real hell, a brutal carnage, and a merciless game for survival. Not the most courageous players are able to plunge into such a hell. However, in the Japanese version of Contra Spirits, there is no such dependence, and to see the last fight with the boss and a good ending is enough difficulty Normal. Decide for yourself what difficulties you are ready to take on your shoulders as a member of the death squad Contra, based on the level of the game, the gaming experience, the number of nerves, etc., and choose which version and complexity you prefer, but be sure to get a good ending in this A terrible war.
‹
›
Home
View web version