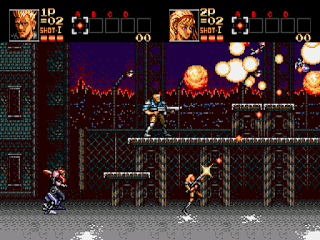 Genre: Action
Perspective: Side view
Visual: 2D scrolling
Gameplay: Arcade, Shooter
Setting: Sci-Fi / Futuristic
Published by: Konami (America)
Developed by: Konami Co.
Released: 1994
Platform: SEGA Genesis / Mega Drive
Who does not know Contra? Yes, everyone played it on the NES, but on SEGA Genesis this game got a second life, cool graphics and sound. Less words: choose one of the four characters and into battle. The first task for you will be to destroy the raging robot. But before each mission, you must go through the streets, swarming with armed uncles, cyborgs, robots and other equipment. Moist everything!All lovers of Sega Genesis should be grateful to Konami, which translated the game called Contra on this platform. And translated, I must say, just superb. In my opinion Contra Hard Corps is one of the most driving and fastest games on SEGA Genesis. From now on, you have four characters available, each with 4 original weapons. You can play both one and two players at the same time, and believe me, you will not be harmed by help - alone it's much harder to destroy crowds of enemies and dozens of bosses in the whole screen. The reward will be 5 (!!!) endings, and the path of each of them will be different from the others. Graphics is also good - very well drawn all kinds of explosions and backgrounds. The action, consisting of continuous shooting and explosions, occurs under cool music and is accompanied by excellent sound effects. This game has no shortcomings, it's a real masterpiece.

Favorite character boring people. Set its impressive weaponry. By thermal detonators, which are all characters added laser rifle - a weapon useful, albeit rather weak; large-caliber rifle - a weapon has a low rate of fire, but a very large destructive power, are very useful for the elimination of the boss; homing missiles - shoot fast and shoot accurately (even though there homing), but bosses do not care for them. Although this weapon is useful if life really do not want to lose, and it is necessary to eliminate the boss. But the fan-shaped machine will help you "stacked" the whole armada of enemies.

A friend of our fighting each other, and a set of arms also fit this description: a plasma machine - a very useful, fairly powerful weapon; mounted grenade launcher - a very powerful kind of weapons, but to hit the target from it rather difficult; Laser - albeit slowly shoots, but one shot is able to eliminate a squad of enemies; fan-shaped laser -has a very large area of ​​damage, though lethal force is clearly pumped up.

Absolutely wild wolf - a cyborg, with only one purpose in life: revenge. Photon gun in his hand - a fun weapon, but the power for such an aggressive character is clearly not enough; Fire fist - the most powerful weapon in the entire game; flame thrower - a weak weapon, but you can enable and run forward boldly - to you no one will approach (no time); plasma ball - a very powerful weapon, it can be accumulated, but only shoot forward.