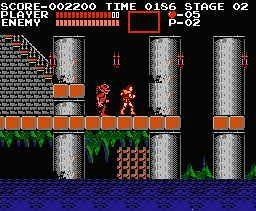 Genre: Action
Perspective: Side view
Visual: 2D scrolling
Gameplay: Arcade, Platform
Setting: Fantasy
Narrative: Horror
Published by: Konami
Developed by: Konami Industry Co.
Released: 1987
Platform: Nintendo (NES)
It began with Castlevania story of the famous game series about the castle and Dracula. Vampire Hunter Simon Belmont is sent to the residence of the sinister Count in order to rest him once and for all (or rather - "the time"). Weapon vampirobortsa is a long whip. There are additional weapons - a knife, an ax, holy water, the cross-boomerang and magical hours. Defeating monsters on the way, familiar to us from the horror movie - vampire bat, Medusa, Mummy, Frankenstein's monster and Death - Simon comes to Dracula's throne room and comes to grips with himself the master of the castle. The game is difficult, including because of the kind of control, but at the same time incredibly exciting. Immortal classic NES.

Fighting with the Bat, do not let it hurt you, beat it with a whip and jump more often. Throw it with axes. When it's close to the floor, stop the clock (Up + B) and hit while the opponent is still. Take the red ball, falling down from the defeated enemy.
In one of the candles you will find a boomerang-cross. He will help you in the passage. Change your find on the clock if they find themselves on the way. In the battle with the flying head of Gorgons, use conventional and additional weapons, as well as clocks.
Entering the hall, you will see two dead men. Behind the left in the stairs a prize is hidden on a plate. On two dead, the clock does not work, use another additional weapon. In the castle dungeon in the water can not fall. Before the water in the candle you will find a clock that will help in the passage of the dungeon.
At the entrance to the castle in the steps you will find water. After recovering, take the dagger. Mark it in the dwarf. Temporarily turning it off, fight with Frankenstein.
The usual or additional weapons reflect the axes thrown at you by knights. Make many strikes so that the knight will be defeated. Strike the whip and drive the red skeletons back into the ground. And go quickly. In the battle with "death with a scythe," use boomerang-crosses.
Fish-vampires in the basement of Dracula's castle (those that jump out of the streams of blood) can not be killed, but, jumping to the right to the right, climb up the stairs. There enter the door and smash all the candles on your way. Against Dracula are effective crosses boomerangs. Always move around, beating off the fire from Dracula's cloak. Count Dracula can be killed with chains, without approaching him too closely. The optimal distance is two bricks on the floor. Dracula will die, receiving thirty-two blows. And you will die if the vampire graph hits you four times or lights up with fire. Hit Dracula in the head, when he stops flickering, and you take a cube of life. Hit the head and dragon. Pick up the ball falling from above, and the game is over.
‹
›
Home
View web version