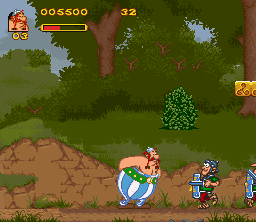 Genre: Action
Perspective: 3rd-person, Side view
Gameplay: Platform
Published by: Infogrames Europe SA
Developed by: Infogrames Europe SA, Bit Managers S.L.
Released: 1996
Platform: Super Nintendo (SNES)
Continuation of the game even more colorful and interesting. Asterix and Obelix will visit and in Greece at the Olympic Games, and a Swiss bank, play rugby in England, but in the end they will have to fight with a furious bull bullfighting arena in Spain. Good music and interesting game. And, of course, lupite more Romans!

The game is a platform game: the character evolves in scrolling scenery. It confronts according to the levels of enemies like Roman soldiers, pirates, Greek soldiers or animals like wild boars or eagles.
Golden boxes float in the air: they contain a bonus, which the player gets by hitting the box. They may contain coins (one or ten), stars, food, an extra life or an invincibility bonus; The pieces are collected throughout the levels and give the right to an additional life after 50 pieces; As for the stars, there are 10 per level, and collect them all gives bonus level (16 bonus levels in total), a decor filled with coins and other bonuses, where the player has 30 seconds to collect as much as possible . The food goes up the character's life gauge, and changes according to the part of the game (wild boar thigh if the player is in the first part, cheese if it is in Helvetia, banana if it is in Greece, It is in Egypt and onion if it is in Hispania all referring to the albums concerned); The invincibility bonus comes in the form of a magic potion gourd for Asterix and a roasted boar for Obelix: the player is then invincible and automatically strikes enemies for a limited time.
The game consists of 18 levels ("acts"). At the end of some levels, a password presented as a series of four portraits of characters in the series is shown to the player and allows access to the corresponding level from the menu.
Level select: At the Infogrames logo screen press Left, R, Right, L, X, A, then select a level in the options screen.
‹
›
Home
View web version