Asterix and the Great Rescue (SEGA) 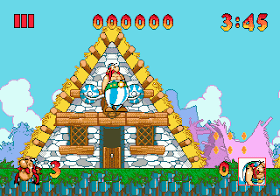 Genre: Action
Perspective: Side view
Visual: 2D scrolling
Gameplay: Platform
Published by: SEGA of America
Developed by: Core Design Ltd.
Released: 1994
Platforms: SEGA Genesis / Mega Drive, SEGA Master System (MS)
This platformer is based on the plot of comics and a cartoon about the adventures of Asterix and Obelix. In their village there was a misfortune, the Romans kidnapped the druid Getafix (Panoramix) and the favorite dog Obelix - Dogmatix. Friends will visit many of the camps of the Romans Totorium, Aquarium, Lavoyanum and Compendium. Obelix and Asterix do not have an easy way to find their friends and save the village. Rounds can be held as Asterix, and Obelix. Starting to play this game, you forget about everything and it seems that you are watching a cartoon.