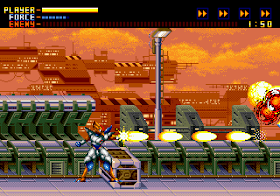 Genre: Action
Perspective: Side view
Visual: 2D scrolling
Gameplay: Arcade, Shooter
Setting: Sci-Fi / Futuristic
Published by: SEGA Enterprises Ltd.
Developed by: Treasure Co.
Released: 1995
Platform: SEGA Genesis / Mega Drive
This game tells of a young man who mutated into a kind of cyber-armor with the head of an eagle. How and why it happened - we are told in the beginning in the form of text. Honestly, even after reading the translation, I understood a little, but, in general, everything is as usual, i.e. the main villain decided to destroy all of humanity ... then you can fantasize yourself or read the whole essence of the mess at the beginning of the intro.
Before you start playing it is worthwhile to climb into the options and change the difficulty level from "super hard" to "super easy". Normal level "normal" is not present, and "super easy" does not in any way mean that it will be easy to play. Here you can listen to music from the game, which in some places is very good and fits well into the general atmosphere of the game.
At the beginning and throughout the game, a choice of 5 weapons is given, 4 of which we can take with us. Among them:
Simple shots, representing a continuous flow of plasma clusters.
Flamethrower
Different in power lasers
Self-guided items, resembling the same flamethrower and which can very much help to overwhelm the boss
Scattered shots.
The weapon has a limited ammunition that can be replenished as the game progresses. On the battlefield will meet the lives and types of weapons, which are written above. After the choice of how to wet the mutants is done, click start - go to the choice of displaying indicators of life, weapons and life of the bosses. You can choose to be displayed in numbers, you can in strips, you can in strips and numbers, you can in numbers and stripes, and so already 26 options. The sense of this is not enough, but apparently the developers wanted to please all tastes. Next we are offered to test the management, which we do, and then.

And then begins one of the most hurricane 16-bit action games. Large enough and well traced, smoothly animated protagonist runs from left to right and fires around everything that moves and does not move. Enemies are also pleased with their drawing and appearance. The gameplay is dense and does not get bored for a second. The game has bright and juicy colors, pleasing the eye, cool explosions in the best traditions of Japanese shooters. Management is standard, however, with some innovations. This cyborg bird has the ability (the joystick down and the A button) to instantly move from one side of the screen to the other. It looks beautiful and spectacular, in the manner of an anime about samurai, when he makes one or two movements and the enemy is defeated. Another "bird-man" is capable of hanging in the air in any place and firing from there in a different direction. There is also a counterattack, with a double click on the button a small explosion is formed, which helps in close combat. The player has the ability to shoot standing in place in any direction, or to run, but shoot only in the specified direction, something like "strafe" side view. Also in the game there is an interesting feature - by clicking on the pause, you can change the speed of the entire game to a slower one. This helps when passing some bosses. Now about them.
Such a number of bosses, meeting on a square centimeter, I have not seen in any game. It seems that the creators went on a kind of experiment - to make a shooter, consisting mainly of bosses, because they appear almost every 30 seconds (!!!). The experiment, in general, was a success, although sometimes it would be desirable to simply run around the stage, rampaging hordes of foreign invaders. The bosses are very carefully drawn, and the design of some of them is very original and interesting. As I have noticed, many bosses resemble the real animal world and the world of insects: all kinds of caterpillars, butterflies and other lesser known inhabitants of flora and fauna.
The game is quite complicated even on an easy level of complexity, but it does not represent a special task. There is a system of passwords that can be seen after death. Of the minuses, I note that the design of many levels is not very interesting, but it compensates for the gameplay itself.