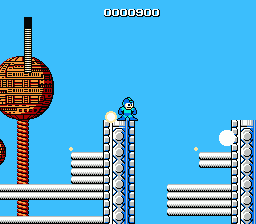 Genre: Action
Perspective: Side view
Visual: 2D scrolling
Gameplay: Arcade, Platform
Setting: Sci-Fi / Futuristic
Art: Anime / Manga
Published by: Capcom U.S.A.
Developed by: Capcom Co.
Released: 1987
Platform: Nintendo (NES)
The popular hero of Capcom games. For those who do not know - Mega Man - a robot that specializes in cleaning the world from robots pests. Using your wrist gun, you have to go through several levels of the eyeballs by the very pests and stuffed. At the end of each level we are waiting for the boss, after the victory over which you will get his gun, with which you will be able to continue to fulfill its mission more effectively. The game deserves a mandatory viewing, as not only has good graphics and sound, but also quite interesting, especially the battle with the bosses, and, of course, the bosses themselves.