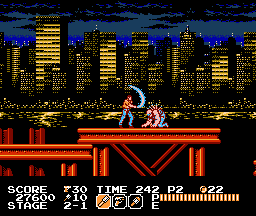 Genre: Action, Racing / Driving
Perspective: Side view, Top-down
Gameplay: Platform, Shooter
Setting: Sci-Fi / Futuristic
Narrative: Detective / Mystery
Published by: American Sammy Corporation
Developed by: Aicom Corporation
Released: 1991
Platform: Nintendo (NES)
Here you and the race, and arcade and even a virtual shooting range a la Punisher or Mechanized Attack. The hero also has three types of weapons: a sword is very sickly, almost the most powerful weapon, but it works extremely closely. Then the gun, which actually has no effect - weak most of all, but shoots. And finally, the coolest and the most rare thing - a grenade.Speaking of bosses: the first is no problem, in the second, too. This is the third more complicated. It is necessary to jump over them and landing very close, throwing grenades. When he starts to run around, jump on the stones, there again as close as possible to the enemy. The fourth boss amenable to faster and simpler: a jump and hit the sword on the blue gizmo on the trunk, or jump and throw grenades. The last shoot two edinichki life, while the sword - no one. Do not forget to cower from the shots and move away from the rockets.

A - throwing grenades;
A - to shoot from the machine gun.
In the car:
A - speeds;
SELECT - weapon change.