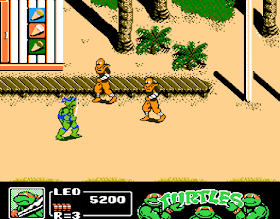 Genre: Action
Perspective: Side view
Visual: 2D scrolling
Gameplay: Beat 'em up / Brawler
Published by: Konami of America
Developed by: Konami Co.
Released: 1992
Platform: Nintendo (NES)
After the success of Ninja Turtles 2 Konami released the third part of the series specifically for the NES. Without further ado, the developers have created a new game in the genre beat'em up. Part 3, in general, similar to the second, but it has a lot of improvements. Graphics became more beautiful, background, objects, enemies are drawn more clearly and in more detail, interacting with turtles objects become larger (and funny animations, too, such as when the hero flattens into a pancake or it is covered with soot). Characters in comparison with the second part appeared individuality - each their own special moves. However, they should be used with caution - every super impact disappears health unit. The plot is served in cinematic style, simple, but very exciting. A more than worthy sequel, great game series.
Super Strikes: Press B, then sharply A - a unique special moves for each TurtlePry off the enemy - "Down + B".
‹
›
Home
View web version