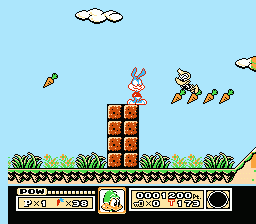 Genre: Action
Perspective: Side view
Visual: 2D scrolling
Gameplay: Platform
Published by: Konami
Developed by: Konami Co.
Released: 1991
Platform: Nintendo (NES)
Konami has done a lot of great games on Tiny Toon universe. This creature - one of them. We offer help rabbit Buster save his girlfriend Babs. But to manage a rabbit is not necessary at the right time can change eared at any of his three friends. Plucky Duck is able to move smoothly through the air on the wings; Tasmanian Devil Dizzy - spin hurricane; Furrboll cat - climbing the wall at any height. A challenging game will not name, but it is necessary to keep eyes open ear: dangerous enemies here. Reckless, fun platformer will surely love how people knowledgeable of the animated series, as well as those who are about him for the first time heard.

A - jump, confirmation of the choice of partner;
B - shooting (from the third level).
Super receptions of characters:
The wolf, having twirled in his famous vortex (button B), simply sweeps everyone off the face of the earth. Watch for this, so that he could replenish the energy reserve (shown by the ellipsis on the lower left).
The mouse can get out of the abysses (A + ↑). The duckling flies (A + joystick in the direction of flight).