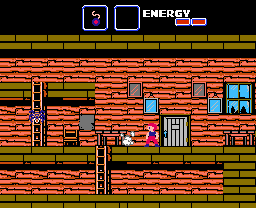 Genre: Action
Perspective: Side view
Visual: 2D scrolling
Gameplay: Arcade, Platformr
Setting: North America
Published by: Konami
Developed by: Konami Industry Co.
Released: 1987
Platform: Nintendo (NES)
In the game, we will play for Mikey Walsh - one of the members of the gang, whose friends were abducted by the opposing faction - the Fratelli family. Our task is to save our friends and Annie the Mermaid, but this will not be easy, because now the character will have to descend even into creepy underground labyrinths! But first you will need to destroy the main server of the enemy and have time to not let the members of the family Fratelli do something bad with the hostages. During the game, we will be opposed by Mama Fratelli, her crazy cousin Pipsquek (Pipsqueak, appeared exclusively in this game), as well as her two crazy sons!
In "The Goonies II" gameplay consists of two modes: platform (with standard side scrolling) and with a first-person view. Most of the time in the game, as in the first part, we have to travel on a 2D non-linear map, moving to new areas with the help of stairs and doors (which, by the way, can act as portals leading us to completely different, not neighboring zones). In total, the game has several different types of zones, each with its own unique enemies, graphics and music.
Once we enter the door, the game immediately goes into first-person mode - here we can navigate around the location using menu commands (in a similar style to Shadowgate, 1989). Exploring the territory, passing through different rooms, finding hidden objects and interacting with the game characters, Miki need to release from the cells of the six "dunce". Each rescued team member increases the health of the protagonist. The items that we find in these locations can then be used both in the platform maze (for example, weapons or transceivers) and in the rooms themselves (for example: candles, keys or stairs).
In the game there are quite a lot of different weapons that we can use, and functionally it can be for us primary or secondary. Of the primary (main) weapons available: yo-yo (melee weapons with limited power), slingshot, boomerang (slower, but long-range weapons with unlimited use). Secondary weapons in the game are: Molotov's bombs and cocktails. Initially, the protagonist can carry only a few of these destructive means, but over time we can increase the capacity of his backpack. The range of Molotov's bombs and cocktails is very small, but in the radius of the explosion to enemies (and sometimes the hero himself, if time does not go away), very serious damage is inflicted. Also with the help of bombs in the game you can identify numerous hidden doors.
And additional bonuses in the game there are special shoes: one of its kind increases the height of jumps, and the second (hyperobub) significantly speeds up the movement of the main character.
Compared with the first part of the game there were quite a few changes: the graphics improved slightly, a short intro appeared, the base of sound effects expanded and the musical accompaniment was slightly modified (now it is much more pleasant and melodic). But, the most dramatic change is the introduction of the ability to travel through the rooms in the first-person mode. This is one of the greatest achievements that developers have brought to the platform-adventure game concept of the late 80's. After all, almost all other games with a similar perspective related exclusively to role-playing or adventure genres. Although, in the opinion of some reviewers, locations with perspective from the first person only slow down the gameplay, but still such an option significantly expands the platform gameplay and does not connect the game with banal running and climbing the stairs. Thanks to the developers from Konami for such an innovative game.
‹
›
Home
View web version