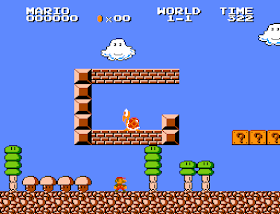 Genre: Action
Perspective: Side view
Visual: 2D scrolling
Gameplay: Platform
Published by: Nintendo of America Inc.
Developed by: Nintendo Co.
Released: 1986
Platform: Nintendo (NES)
This, oddly enough, the official sequel to Super Mario Bros 1, which came out only in Japan. In fact, a MAP-packs with a slightly redesigned graphics. I added some elements, such as mushroom poisoning, wind levels, spring, jump into the heights beyond the clouds, and the like "goodies". You can play for either Mario, Luigi, and the gameplay is both different brothers. Second Mario complexity is much higher than in the first. In fact, this is one of the most difficult game in the entire series.

You can use four different zones of instantaneous transition to higher levels!

It will allow you to move from World 1-3 to World 4-1. To reach the transition zone, get to World 1-3. And then take it to the Potion to the right of the tower. Throw Potion in the Bank. Enter the subspace and move, just by going to the Bank.

The next transition zone takes you from World 3-1 to World 5-1. To reach it, go to the beginning of the world 3-1. Fall into the second waterfall and land on a narrow hill in the middle of the waterfall. Enter the door on the hillock. Inside is a long row of grass, which can be torn out. The 11th on the left and the sixth on the right are Potions. Take the Potion and use it to enter the subspace in the Bank just behind the grass. Now you are transported to World 5-1.

Use the following transition to get from World 4-2 to World 61. Head to World 1-2 section with all Whales. When you reach the platform with the Bank, use Potion to create a subspace, and then use the Bank to go.

This transition will send you from World 5-3 to World 7. The transition is located immediately after entering the room with the Masks. Climb the long stairs from the room with the Masks to the top. Above your head you will see a platform with the Bank. To get to it, you have to make a powerful leap on your haunches (Luigi is especially good for this). When you get on the platform, just with the help of the Potions, enter the subspace and then move to World 7.
‹
›
Home
View web version