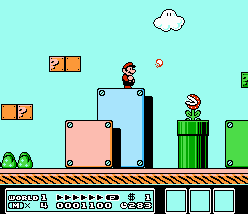 Genre: Action
Perspective: Side view
Visual: 2D scrolling
Gameplay: Platform
Published by: Nintendo of America Inc.
Developed by: Nintendo R&D2
Released: 1988
Platform: Nintendo (NES)
Before the creators of Super Mario Bros. It had the task - to make an incredible hit, able to captivate players throughout the world to surpass the previous parts of the series around. They succeeded. The eight huge worlds, lots of different levels, the mountain of prizes, lots of interesting enemies, lots of secret places, stunning scenery, addictive gameplay - all this does not give you a break from the game for a moment. In each of the worlds there is a map, and the levels should be chosen, moving right along it. Fungi and a flower is not limited to - Mario can now wear suits small animals to use them to fly, swim, or to fight. Prizes can be stored in the store, pulling as needed. And besides all this, in SMB3 many more innovations.