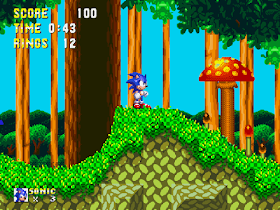 Genre: Action
Perspective: Side view
Visual: 2D scrolling
Gameplay: Platform
Art: Anime / Manga
Published by: SEGA of America
Developed by: Sonic Team
Released: 1994
Platform: SEGA Genesis / Mega Drive
Sonic & Knuckles - the fourth series of the series of adventures of the famous hedgehog named Sonic. Recognized hit the distant '90s, which, oddly enough, was born out of this failure. The thing is that the company-developer, working on the third part, released as a result of an unfinished product. It happened due to the fact that the work has not yet been completed and the planned release of a period inevitably approaching. Nevertheless, the release date did not carry.
Many shortcomings noted by fans of console games, shaken unconditional at that time brand reputation. It was necessary to urgently do something. And so was born the 4th part, in which the protagonists are very Sonic and Knuckles, already familiar to us from the previous game, in which he was an enemy of the blue hedgehog. Both characters have the same goal - to destroy the insidious plans of Dr. Eggman.
A few words on the chart. This element, as it should be logical, is the most advanced in comparison with all the previous games of the series. Stunning background and affecting their originality bosses create a unique overall visual picture.
Character control is somewhat different. In Knuckles have additional abilities: he can climb walls and fly. Scripts are also a little different depending on which of the characters you choose to play.
The game provides for a special bonus levels. There, he found himself on a large site, performed in a pseudo 3D style, you will move in this direction by collecting rings.