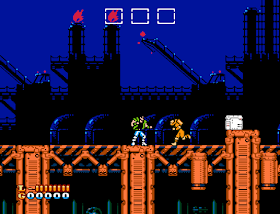 Genre: Action
Perspective: Side view
Visual: 2D scrolling
Setting: Sci-Fi / Futuristic
Published by: Jaleco USA
Developed by: Natsume Co.
Released: 1991
Platform: Nintendo (NES)
Believe me, this game deserves your attention! Just a cool arcade game is not inferior to the famous Super Contra and Contra Force. But unlike them it focused only on one player. Here you control a strong character in a green vest, gray pants and black glasses. He knows how to punch, jump, crouch, and cling to the network. Fist - main effective weapon. But the game would not be a game if it was not something else that. The fact that the hero finds the components (blocks) to create an effective weapon. Only two types of components - alpha and beta. And there are three slots for their association. Gathering and combining these three components, you get a floating robot assistant that will always be in over your head and in your order to start a fire. Weapon type robot depends on the combination of blocks. Talk about the game can be long, it is better just go and play. The graphics in the game is very high quality, the levels are well thought out and drawn, the music just five. The game is dynamic and uses all possible consoles.

After the player pass the level "A", he will be given the opportunity to choose the remaining B, C, D, E, F, in any order.
Area A (Oil Refenery) - the very first level, the game starts with him.
Area B (Factory)
Area C (Circus) - Level in the Japanese version of the game. The shortest of all levels.
Area C (Nuclear Submarine) - the level of the American and European versions.
Area D (Filtration Plant) - level with slippery surfaces, and later under the water.
Area E (Anti Gravity Research Facility) - the longest level after the final. There are sections on foot ceilings.
Area F (Burning City)
Final Area (Space Shuttle) - the level will be available when the player has finished all the previous level has features such as a change of gravity, as well as the three already known boss.

Coins \ P - fall out of enemies, and from the boxes. Little 50, most 200. They are needed to buy items.
Alpha \ Beta - if you collect in a random order 3 pieces, then the character will soar over the assistant companion to help in the battle. If you collect the same characters, the player will receive a suit shooting napalm (in the Japanese version of a flamethrower), limited in time, and at the time damage is taken away quickly. If you beat on the subject, he turned into a large coin \ P.
Bag \ P box - For a while you'll have to knock as many coins \ P from the bonus until it disappears
Pomegranate - the trap explodes and injures a player. Sometimes appears instead Bag \ P box.
Buy for coins \ P
Super fist - Cost 100. Your suit will turn red (turns pink in Japanese) from your strokes enemy gets 2 times more damage. Disappears if you get 3 times the damage.
Energy - Cost Restores 300 health scale.
Life - Cost of 2000. Additional life. Extremely rare

Assists in combat with the enemy. To his appearance you need to collect the Alpha or Beta icons in a particular combination.
(A - Alpha, B - Beta)
AAA - Attack of the ball rotating on a diagonal
AAB - Attacks laser
ABA - Attacks sword
ABB - Attack of the balls bounce off surfaces
BAA - Attacks balls, flying upward
BAB - Attacks boomerangs
FAB - Attacks train fire if you hold the button B, you can run / jump during the attack (when using Turbo B does not attack)
BBB - Attacks with grenades
The satellite can pick up and throw it at the enemy (Down + A then B), or climb vertically upward (Down + A and then release Down). The satellite is vulnerable, it deals damage to the enemy and yourself in contact, and then disappears.
If you collect twice the same combination of satellite, you get fire suit (flamethrower in the Japanese version). This bonus is limited in time and causes very great damage to the enemy, but if you get damage, time is rapidly declining.
‹
›
Home
View web version